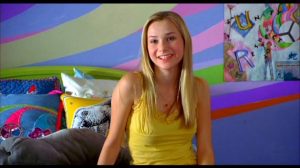 Born on August 18th, 1987, Mika Sue Boorem, popularly known as Mika Boorem is an actress, director, writer and producer based in Los Angeles.

Her name “Mika” means a beautiful flower in Japanese language. She has appeared in the movies Blue Crush (2002), Carolina (2003), Sleepover (2004) and Smile (2005). She was born and raised in Tucson, Arizona to parents Holly Sue (née Thomas) and Benjamin Melvin Boorem. Mika also has a brother, Benjamin.

Her father is of a Swedish descent and mother is of Ashkenazi Jewish descent. Boorem began acting and producing since 2010. But, she is best known for her acting career since 1994. Other movies played by Boorem includes The Patriot, Along Came a Spider, Hearts in Atlantis, The Ward, Virgin Alexander, Good Day For It, Dirty Dancing: Havana Nights, Jack Frost, A Dark Desire, Carolina, Riding in Cars with Boys, Things You Can Tell Just by Looking at Her, Mighty Joe Young, Trucker and others.

She has also appeared on Tv shows like Dawson’s Creek, House, Touched by an Angel, Ghost Whisperer, The Initiation of Sarah, Augusta, Gone, Providence, The Tom Show and many more. Boorem’s birth sign is Leo.

Boorem started her acting career in a local theatre at Arizona and attended Lycée Français de Los Angeles after moving to Los Angeles with her family at the young age of six. She appeared in a number of commercials at Los Angeles. She has starred in the films Sleepover (2004) and Smile (2005).

She did lead roles in the films Sleepover (2004) and Smile (2005) and did supporting roles in the films Jack Frost (1998), The Patriot (2000), Along Came a Spider (2001), Hearts in Atlantis (2001), Blue Crush (2002) and Carolina (2003). Boorem also did recurring roles in the television series Dawson’s Creek and Touched by an Angel. She has been nominated for Teen Choice Award for Choice TV Sidekick for her role as “Harley Hetson” in Dawson’s Creek and received four Young Artist Award nominations.

She received Young Artist Award for her role as Natalie in “Jack Frost”. She also appeared in David Cook’s music video “Light on”. She also won a Prism Award. Boorem received “Rising Star Award” for her role in “Smile”.

Boorem is a good friend with Alexa PenaVega. Boorem’s super hit character was Hannah on 2004’s Sleepover alongside Alexa Vega. Talking about her achievements, she is an experienced gymnast, she can speak French and is a blackbelt in Tae kwon do. She has also co-founded an independent organization that works for the betterment of the children of Madagascar named “MadaKilonga”.

The stunningly gorgeous and magnificently attractive Mika Boorem’s height is 5 feet 5 inches. She has naturally beautiful face as well as slender legs and nice feet. She looks super-hot in bikini. Her sexy bikini pictures can also be accessed in google and other related sites. As she has a successful career in both television and movies, she gets attractive salary. Talking about her personal life, she is 26 years old and is not married.

Unlike other actors, Boorem has remained silent about her personal life, dating, affairs and boyfriend. But, her name is also joined with the names such as York Shackleton (an American filmmaker and a former professional snowboarder) and Anton Yelchin (an American actor) in the internet that describe them as her boyfriend but we are unaware if the news is confirmed.

Boorems additional information can also be known through wiki and Imdb and other official sites. She can be followed through twitter and Facebook. Mika likes to spend her leisure time by helping the elderly people and loves to hang out with her close friends.