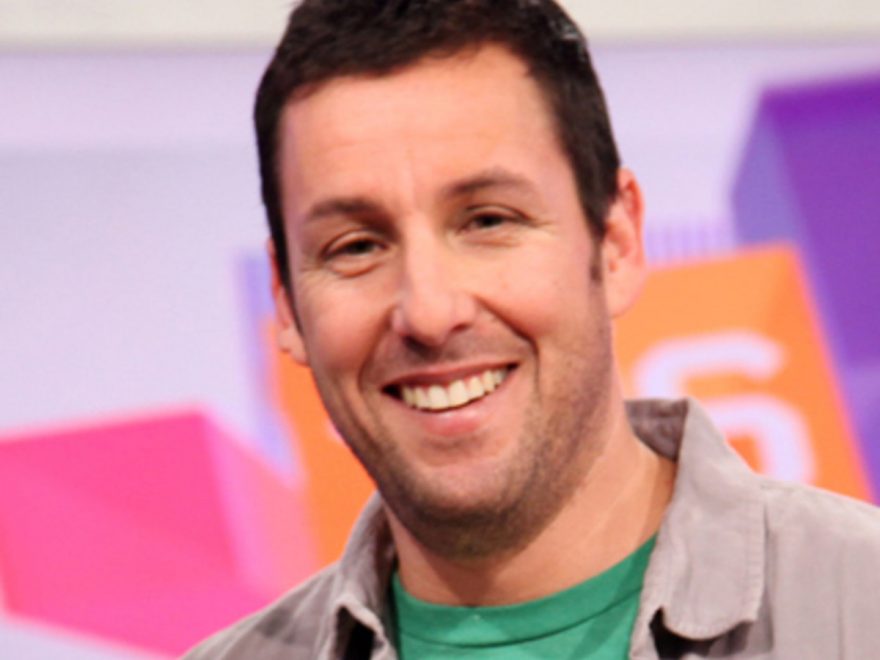 He is an American actor, comedian, screenwriter, entrepreneur, film producer, and musician.

He was the son of Stanley (electrical engineer) and Judy Sandler (nursery school teacher). His family is Jewish, descending from immigrants from Russia on both sides.  His family moved to Manchester, New Hampshire when he was five.

At Manchester, Adam attended Manchester Central High School. He found he was a natural comic, and nurtured his talent while at New York University by performing regularly in clubs and on campuses. Adam graduated from NYU’s Tisch School of the Arts in 1988. He is a huge fan of Van Halen, The Police, and Styx.

There is usually a reference or song in his movies. On June 22, 2003, Sandler married actress Jacqueline Samantha Titone (Jackie).  Her mom and dad had a bitter divorce in the 90s that lasted 7 years. Jackie remains estranged from her father.

Sandler lives with his family in Los Angeles, but also owns houses in New York City and Florida. Adam Sandler has a lavishing career.  In the late 1980s, Sandler played Theo Huxtable’s friend, Smitty, on The Cosby Show. He was also a performer for the MTV game show Remote Control, on which he made appearances as the characters “Trivia Delinquent” or “Stud Boy”. In 1989, he starred in the film Going Overboard.

In 1990, Sandler was hired as a writer for Saturday Night Live. He became a featured player the following year, making a name for himself by performing amusing original songs on the show, including “The Thanksgiving Song” and “The Chanukah Song”. This talented actor, comedian, etc starred in several movies. In 1994, he co-starred in Airheads with Brendan Fraser and Steve Buscemi. He starred in Billy Madison in 1995.

He acted in At the Movies and Siskel and Ebert. In 1996 He followed this film with other financially successful comedies such as Bulletproof. In 1998, He was initially cast in the bachelor party-themed comedy/thriller Very Bad Things in 1988 but had to back out due to his involvement in The Waterboy. “Waterboy” was one of his first hits.  In 2002, he did Punch-Drunk Love.  For this movie, he was nominated for Golden Globe.

He also did Spanglish (2004) and Reign Over Me (2007) films. In 2008, Sandler was stared in Bedtime Stories, a fantasy film directed by Bringing Down the house director Adam Shankman. In 2009, Sandler starred in Judd Apatow’s third directorial feature Funny People. Sandler starred in the 2011 film Just Go with It, with Jennifer Aniston, a romantic comedy written by Allan Loeb and Tim Dowling and directed by Dennis Dugan.

He played a plastic surgeon who asks his office manager, played by Aniston, to pose as his wife, to prove his honesty to his much younger girlfriend, played by Brooklyn Decker who starred in That’s My Boy with Andy Samberg (2012).

Sandler is leading in a Warner Bros. upcoming romantic comedy Blended with Drew Barrymore. On September 4, 2013, Sandler was added to the cast of the comedy film Men, Women & Children, directed by Jason Reitman, which is currently being filmed in Austin. sandler has an amazing personality.

This handsome hunk has a height of 5′ 9½” (1.77 m) and weighs around 85 kg. Adam Sandler was the man behind a series of comedy blockbusters that bore his characteristic wackiness and became more famously known as ‘Adam Sandler movies’. The accomplished comedian and actor is also an impressive singer. Adam Sandler’s death hoax spreads on Facebook. Rumors of the actor’s alleged demise gained after a ‘R.I.P.

Adam Sandler Facebook page attracted nearly one million ‘likes’. However, the April 2014 report has now been confirmed as a complete hoax and just the latest news in a string of fake celebrity death reports.