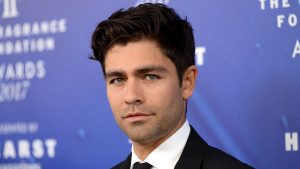 Multi-talented Adrian Grenier (birth name Adrian S. Grenier) was born on July 10, 1976 (age 37 years) to Karesse Grenier and John T. Dunbar in Albuquerque, New Mexico. His parents were never married. He grew up in Brooklyn, New York by his mother who worked as a real agent. His ethnicity is multiracial.

His father has English, Irish, Scottish, German (ancestry whereas mother has Native American ancestry. He attended Fiorello H. LaGuardia High School of Music & Art and Performing Arts and in 1998 he graduated from Bard College. This is a liberal arts college in Annandale-on-Husdon, New York. He studied drama and music here.

When he was in college he made his first film debut in the independent movie Arresting Gena in 1997. Adrian Grenier was featured in a comedy drama “The Adventures of Sebastian Cole” and gained a critical attention for this film. In 1998, he was stared in a small rile in Woody Allen’s Celebrity; appearing alongside of Leonardo DiCaprio. In 1999 he was cast opposite to Melissa Joan Hart in Drive Me Crazy and also in James Toback’s Harvard Man in 2001. He gained huge success when he was stared as the lead role Vincent Chase in the HBO series entourage.  entourage ran for eight seasons from 2004-2011.

This HBO series was nominated for numerous Emmy awards, including Outstanding Comedy Series. During entourage series in 2006, he also played a role of Anne Hathaway’s boyfriend, Nate in the film The Devil Wears Prada. Grenier played role in in the post-apocalyptic film, Goodbye World alongside Gaby Hoffman in 2013. This movie was premiered in 2013 at Los Angeles Film Festival and also received good reviews. On April 4, 2014, the film made its cinematic release in the United States. Adrian Grenier is not only a successful actor but also an aspiring director as well as producer. In 2001, he started Reckless Productions.

His company mainly focused and creating social awareness among people. They produced socially minded films. In 2002, Adrian’s first directorial debut “Shot in the Dar” was premiered. O June 3, 2007 HBO distributed the documentary and it premiered on the channel. On June 2, 2008, Grenier introduced a new television series, Alter Eco.

This show was aired on Discovery communications channel and Planet Green.  HBO premiered another documentary by Grenier called, Teenage Paparazzo.  It premiered at the Sundance Film Festival on September 27, 2010. As a producer Grenier worked on the documentary for three years. Aside from HBO, Teenage Paparazzo premiered on 40 other places around the globe. In 2010 Adrian stated working as a producer with the director Matthew Cooke on the full length feature documentary, How to Make Money Selling Drugs.

This movie was considered as worst domestic policy failures in recent American History. Extra ordinary Adrian Grenier is also a musician apart from directing, producing and acting on movies.  He plays guitar, bass and drums. He was a member of two New York band and also a lead singer in Kid Friendly and drummer in The Honey Brothers.  In May 2012, he builds Wreckroom which is a music incubator and recording studio. Grenier returned back in front of the camera in 2014 to reprise his role of Vincent Chase in the upcoming entourage film. Filming began in January and it is set to release in June 2015. Adrian Grenier height is 5ft 10.5in (179 cm) tall. He has got blue eyes and short hair.  He looks much more hot and sexy in his shirtless pictures.

Adrian Grenier hasn’t ever stated being homosexual.  He has never made any public statement about this, so all rumors about if Adrian Grenier is gay remain completely unfounded and unproven.  His net worth is of $15 million. Adrian Grenier accumulated his net worth through his talents as a musician in two New York bands, a director/producer and actor of films and television.