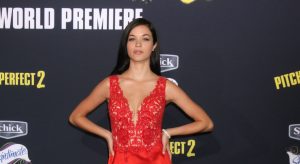 Famous for not only because of her looks and sense of humor but also because of her appearance in 2012’s comedy movies Project X and Pitch Perfect, Alexis Merizalde Knapp, is an emerging American Actress.

“Born on July 31, 1989 in Avonmore, Pennsylvania to the late Bradford Elwood Knapp, Alexis grew up like a little boy with her two brothers in Outer Banks, North Carolina area. She was obsessed with reptiles and gaming when she was a kid.

She started dating movie actor Ryan Phillippe, a divorcee, in the summer of 2010. But the relationship didn’t work out and they broke up in September 2010. But, after the break-up she found out that she was pregnant.

Ultimately, at the age of 22, she gave birth to a daughter Kailani Merizalde Phillippe Knapp on July 1, 2011. It is said that Phillippe and Alexis have mutual agreement to raise the daughter together and even Philippe was present during Kailini birth. Their dating life was always in the media because Ryan was 15 years older than Alexis and had already dated actress Abbie Cornish. Prior to Cornish, he was married to actress Reese Witherspoon.

She is now a single mother and all rumors about director/producer Seth MacFarlane being her boyfriend aren’t officially verifiable. But, however, it is widely speculated that they are dating. It is true that they have a good chemistry and they are good friends.

In 2009, she came into popularity at the very young age of 19, hosting popular internet video series “project Lore”. This was the year when she had already settled in L.A. for one year.  Project Lore attracted a lots of “World of Witchcraft” gamers because it was a unique show discussing the game “World of Witchcraft”. At the same time, she was also working as a model. But, after starting acting in the show “Couples Retreat” later in 2009,  she decides to quit modeling because she didn’t wanted to keep “/modeling “in her acting profile.  Her role as Kat in 2013’s movie Caveman is highly praised by fans. She now stars as Tori, a sexy maintenance worker, who hits the clubs at night and catches up on her sleep at work.”

24 years of age, actress Alexis/singer, was one of the important characters of the musical movie “Pitch Perfect” which won the “MTV MOVIE AWARDS/Best Musical Momment.”  In fact, she sang like a professional in the movie. She was finding it difficult to give the nude scene in the movie Project X because of her moral issues. But, ultimately she did a fine job there as well. The kissing /topless scene of her in the movie is a killer.

She in her acting career has already proved that she is not only a hot woman but also a talented actress who can sing, act and dance. Plus, she is into gaming. That’s definitely a plus point for her male fans to like her. Moreover, she is also known for her wit. Just check out her twitter description and judge yourself:  “Any sufficiently advanced technology is indistinguishable from magic~ I’d like to move400 years in the future.”

The hot actress’s fit banana shaped body with height 5 feet and 8 inches is enough to blow your mind away. If you don’t believe me, just check out her pictures going viral over internet. And, those meaty long legs and exotic thigh of hers, gives you enough reason to watch her for hours. Simply, she is a sweet woman who has good feminine attributes and dressing sense, expressing skills, nice body, good acting abilities and interesting hobbies.

She is a frequent twitter and instagram user and one can always connect with her in there. Toget latest wiki about the young and charismatic actress, Alexis, keep in touch with our website.