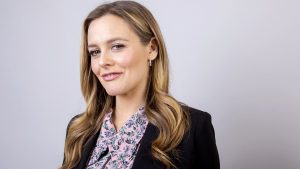 “I came from a generation of actors for whom TV was taboo.” – Alicia Silverstone

Model turned actress Alicia Silverstone always wanted to be an actress. But she says she always was too busy to consider it in her childhood. She starts doing modeling at the age of 6 and later appears in TV commercials. At the age of 16, she plays a small role in an episode of the television series The Wonder Years. Led by a never-ending burning flame of passions and desires to be an actress, she ultimately fulfils her dream of being a big-screen actress with her award-winning performance in the movie The Crush as seductive Adrian Forrester at the age of 17.

Now, in 2014, at the age of 37, she stands proud as an actress who still lives up to her early days reputation of emerging actress. Because her early on-screen acting projects turned commercially and technically successful, people started calling her one of the emerging actress of America in mid 1990s.  Her first movie in 1993 namely “The Wonder Years” won her 1994 MTV Movie Awards in category Best Breakthrough Performance and Best Villain plus a Young Artist Award. With the same consistency, she gets multiple awards for playing the lead role of Cher Horowitz in her fourth movie clueless. clueless was a major breakthrough in her early career.

The movie won her awards such as MTV Movie Awards and a Young Artist Award once again, plus awards from Blockbuster Entertainment Award, Kids’ Choice Awards, National Board of Review, and an American Comedy Award. Also, because of huge success of clueless in 1995,, Barry Josephson of Columbia pictures signs Silverstone to a $10 million three-picture deal.

“I don’t just want to be the girl boys get excited about; I have no desire for people to see me in a sexy way. I won’t do nudity ever.” – Alicia Silverstone

The amazing fact is that Silverstone hasn’t posed nude till this day. But that doesn’t mean she is shy about giving a hot scene if script demands. Most of the time well-behaved and sweet, Alicia can also be a bad girl sometimes. Call her a good girl gone bad or straightforward, but she speaks of her mind. She can’t resist when someone says sweet girls are easy to deceive.

Moreover, she doesn’t think her hot body is for entertainment of others in that way. She is just confident about her acting abilities. However, one should understand a true fact that Silverstone early success was largely dependent on her sexiness.  In the movie Crush, at the age of 17, she nails the role of Adrian Forrester, a hot looking teenager obsessed with an older man. Moreover, in the movie clueless, Alicia’s character of attractive spoiled rich girl Cher Horowitz was single-handedly enough to attract viewers. The huge success of the movie The Crush later gave Alicia an opportunity to work on aerosmith videos, which made her so popular that people started calling her “Aero-smith girl.”

Anyway, weather that be her role in clueless or in the Crush or weather that be her part in aerosmith videos, they all had a notion in common and that is her lustful attitude. These roles demanded another level of hotness plus strong acting abilities which Alicia had plenty of. Because acting is the most important thing in her life, she would be working in the industry for a long time.

Her current age is 37. She is best known for starring in the on-screen projects(movies, television series, videos, or broadways) like  The Crush, clueless, and aerosmith videos, Batman & Robin, The Art of Getting By, Time Stands Still, Scooby Doo 2: Monsters Unleashed and many more.

After working in the hit-movie Batman & Robin as the batgirl, she was able to attract lots of fans. But, her career is thought to be going downside after the movie. It’s partially true. She may not have most successful movies of this century, but she really has worked in some good movies, television series and other onscreen projects in her long career.

In terms of physical sex appeal, she is regarded as one of the hottest women in United States with body measurements of 32-24-34 inches and good height of 5 feet and 5 inches. Alicia with her slim banana shaped body and toned shapely legs, has posed for FHM wearing nothing but a tiny see through nightgown. Nevertheless, one of her hottest on-screen moments till today would be the scene of the movie Crush where she sun bath in a light blue bikini.

She is married to her boyfriend turned husband Christopher Jareck, an American musician, radio show host and actor.  She married tall Jareck on June 11, 2005 in Lake Tahoe, California. A fun wiki about their eating preference: both of them are vegan.

It is said that the couple first met outside a movie theatre in 1997 and after few more meetings, they were already dating each other. Moreover, the couple dated each other for 8 years before their wedding. But, it’s true that they were engaged a year before their marriage.

Don’t be surprised to know that she is an activist. More particularly, people also know her by animal rights or environmental activist. Both the hubby and wife feel same about nature and animals, so they live in an Eco-friendly house consisting solar panels and an organic vegetable garden. The house is located in Los Angeles, where wife Alicia, hubby Christopher and their precious baby boy live together. The baby was born in May 2011 and he is a son. They kept his name Bear Blu Jarecki and the name is quite popular online. Seems like their little Bear already popular in the jungle.

Also, recent rumor that projected Alicia as a pregnant woman cannot be verified. It is said that the couple is planning to have a second child. But, as stated earlier, this is only a speculation until official news floats in.

There’s no doubt that she is famous in social networking sites like twitter. One can always connect to her over there.