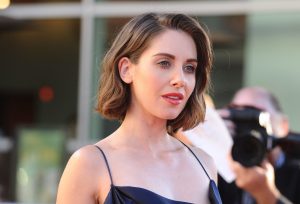 The hot, gorgeous and vibrantly talented American actress Alison Brie was born on December 29, 1982. She was born to mother Joanne and father Charles Terry Schermerhorn in Hollywood, California. Her parents had a divorce when she was very young. In spite of that, she was raised in a good environment by her divorced parents. She used to attend “Christian-Hindu hybrid church” with her father who was a musician and freelance entertainment reporter. She began her acting career in the Jewish community Center situated in Southern California. She joined California Institute of the Arts and graduated with a bachelor’s in theater in the year 2005. In order to achieve her dreams to become an actress, she joined Royal Scottish Academy of Music and Drama in Scotland.

On her way towards her dream, Brie had many up and downs. She also worked as a clown at birthday parties and performed in theater. Her first appearance in the television was in Hannah Montana as a novice hairdresser. She also appeared in mad men season 5 as Trudy Campbell. From the year 2009 to 2014, Brie appeared in the NBC sitcom community where she portrayed Annie Edison. Brie co-hosted an episode of Attack of the Show! In April 2010. She also presented herself in a short segment on Web Soup. In the same year, she appeared in the film Montana Amazon. She was also able to place herself in number 99 at Maxim magazine’s 2010 hot 100. In 2011, she appeared at number 49. By FHM readers, she was voted 56th sexiest woman in the world in the year 2013. Again by Askmen readers, she was voted the 2nd most desirable woman in the world in the year 2014. She also has several film roles. In 2011, she starred in a horror film Scream 4 as Sidney Prescott’s assistant. In 2012, she appeared in comedy film The Five-Year Engagement. In 2014, she voiced Uni-Kitty in The Lego Movie. She also voiced in adult animated series American Dad! In June 2014, it was reported that Brie will join the cast of BoJack Horseman. In the same way, she will be appearing in many big budget films and movies.

Alison Brie hasn’t revealed much about her personal life and relationship status. She hasn’t exposed about her dating. Neither has she had mentioned about her boyfriend. Thirty one year old actress Brieis not married. She has no other rumors and fakes about her and her affairs. The fact about her personal life is out of the attention of media and is kept private. She is a successful actress who is able to achieve huge success, name and fame within a very short period of time. She is also praised for her hard work, contribution and dedication in this field.

Brie has sexy body, beautiful charming eyes and attractive figure with long hot legs and feet which is something memorable to her audience and viewers. The hot and beautiful Brie has commendable height, beautiful hair and fascinating body measurements. 35-24-35.5 is her body measurement whereas 32C is her bra size. She is five feet and three inches tall. After lots of workout, she is able to maintain such beautiful body. Her legs look stunning in her outfits with the attractive heels on her feet. Her attractive body looks sexier in her bikini. Lady earns a commendable salary and has a net worth of $ 5 million.

She has many fans and followers following her in different social networking sites. One can find her esquire photo shoot in her personal sites and fan pages. We can also tweet her in twitter.