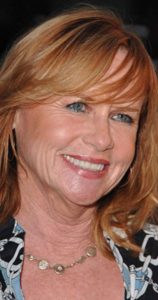 “Wow! It’s really incredibly difficult to get up here.” – Amy Madigan (1990: humorously going to the stage after her name gets announced as the winner of Golden Globe award in the category “Best Performance by an Actress in a Supporting Role in a Series, Mini-Series or Motion Picture Made for TV”)

An influential figure of 80’s and 90’s, veteran American actress Amy Madigan’s acting career earned her the reputation of an eccentric actress who didn’t care about anything but choosing such roles that could kick some ass.

Her hard-earned success is  because of her roles choosing capabilities as she generally selects roles that are extremely difficult to portray such as Terry Jean Moore (a teenage prisoner who becomes pregnant, falls in love and struggles to give birth to her baby inside the prison in “Love Child”), Alison Ransom ( a nuclear war survivor in the television film “The Day After” showcasing a devastating fictional war between Warsaw Pact and Nato forces), McCoy ( an exceptionally supporting ex-soldier with talents such as driving car like a ninja and kicking ass like a superman in the girlfriend rescuing movie “Streets of Fire”), Viola Kelsey (  a school teacher in an affair with a married man in the Academy award, Golden Globe Award, Silver Bear award winning movie about US depression era “Places In The Heart” showcasing a widow trying to save her only family land  tactfully co-operating with a blind white man and a black man, Annie Kinsella ( a helpful wife in the baseball fantasy movie “Field of dreams”, Chaince Kobolowski ( a strongly-willed woman and confident girlfriend  in the comedy movie “Uncle buck” ), Peggy Guggenheim (an American socialite art collector and  heiress in the Oscar-winning biographical movie “Pollock”), Bea McCready (a loving aunt who can do anything to rescue her kidnapped  in Gone Baby Gone.) and many more.

Just watch any of her near to forty movie projects and you will realize that if it wasn’t for talented actors like Amy those amazing scripts wouldn’t have a chance to reach such popularity. Like her movies, her television projects as an actress were quite as well.

One may call her an offbeat actress but right now at the age of 63, she has got all the right reasons to be counted in the list of acting legends of the country as an actress who performed on diverse roles from being a difficult teenager, supportive wife to hard roles such as a solider or an art collector in her long acting career.

Simply, she wasn’t just a glamour actress of her age but in fact she was a dedicated and talented actress who believed in herself and her ever burning flame of passion inside her. You can see that flaming passion of Amy even in her upcoming movie projects namely Frontera, Shirin in love and Stuck. Last but not the least; she is thankful to her husband plus legend American actor, director plus screen-writer Ed Harris for his life-long support. Similarly like his loving wife Amy loving him, Ed loves his wife like nobody else. Also, you will be amazed to know that the couple has worked in various acting projects during different parts of their career.

The loving couple married on November 21, 1983. They have a young woman loving them back as their daughter Lily Dolores Harris. Truly, being born as a member of such family is itself a matter of a pride. Also, Amy’s daughter is much more beautiful than Amy in her young age. No offence there! On the contrary note, the grandmother will be the one who is going to be the inspirational hero of Lily’s future children. Again! No offence there.

A highly acclaimed journalist plus political commentator for his work as a journalist for Word press and political commentator on the shows like Meet the Press and Face the Nation, John Madigan falls in love with Dolores, an administrative assistant and community theater actress. And they raise their daughter well educated and inspired to follow her dreams. Yes! We are talking about Amy’s parent and who inspired her to excel in music and acting since her school days. No wonder her academic achievements supported her acting career and real life later.

Some interesting information about Amy’s parents would be her family historical roots and ancestry that points to a strong Irish tradition. In simple words, her ancestry is Irish including her family.

Other wiki on her personal and professional life can be extracted from Wikipedia’s biography on her.

Now,  moving on  towards her looks, she is now on her 60’s and hasn’t gone through any plastic surgeries. Of course she has got wrinkles from all of the hard work. What do you expect? Plus, she believes in being a natural beauty as a woman. Moreover, her exact net worth is not known but it is believed to be in millions (two digits). Adding her net-worth to her husband fortune, it would be around 50 million to 80 million US dollar.

Furthermore, she is not a tall woman with an average height of 5 feet and 5.5 inches. One can connect her on twitter. Even her dead characters in acting projects are popular till now. This biography article respects the progressive actress for being herself.