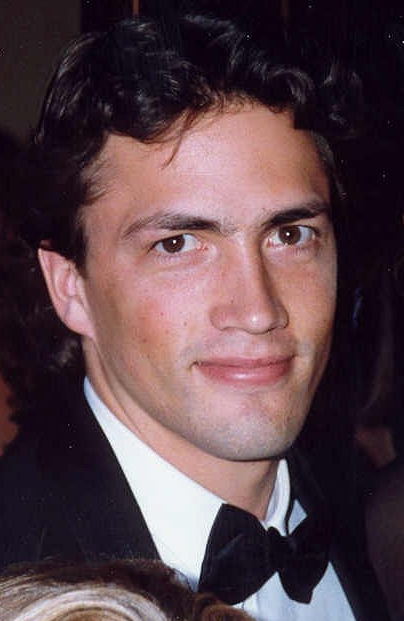 An American actor Andrew Shue is popular for his role in the television series melrose place (1992–1998) as Billy Campbell. His birth name is Andrew Eppley Shue.

Even at the age of forty-seven, he looks super-hot. Moving on to his personal life biography the hottest dude is married to Amy Robach on February 6, 2010.

His current wife Amy is co-anchor at The Today Show and ABC News correspondent. The pair tied the knot on Shue’s thirty-seventh birthday at The Lighthouse at Chelsea Piers, adjacent to the Hudson River on February 6, 2010.

The couple is blessed with two daughters Ava (born in 2003) and Analise (born in 2006). Before Amy, he was married to Jennifer Hageney (floral designer).

They had three children named Nate (born in 1997), Aidan (born in 1999), and Wyatt (born in 2004). But the marriage ended in divorce. Altogether he is blessed with five kids. Forty-Seven years old actor has an excellent, educational and reputed family background. His mother is a bank executive and was the vice president of Chemical Bank Corporation.

His father was a lawyer, real estate developer, president of International Food and Beverage Corporation, and active in Republic politics.

Talking about his siblings, he has a sister named Elisabeth who is also an actress by profession.

He went to Columbia High School in Maplewood, New Jersey. At a young age, he also attended YMCA Camp Widjiwagan. In 1994 he was inducted into the CHS hall of fame along with his sister. During his high school days, he spent his winter time studying and playing soccer in Glasgow, Scotland for Queen’s Park FC. He graduated in 1989 from Dartmouth and his major is B.An in history. After that, he went to Zimbabwe to learn soccer.

He had also taught high school math. When he visited Zimbabwe he played for the Bulawayo Highlanders. After that, he played for Los Angeles United of the Continental Indoor Soccer League in 1993. Later in 1994, he played two games for the Anaheim Splash.

In 1996 he played for the Los Angeles Galaxy of Major League soccer. Moving ahead towards his acting career, he played the role of Billy Campbell on the Aaron Spelling soap opera melrose place in May 1992. He has appeared in numerous movies and some popular are American Shaolin (1991), The Rainmaker (1997), and Gracie (2007).

The richest celebrity Andrew is an actor, football player, and entrepreneur by his profession. His net worth is around $100 million. Besides being a successful actor he is also an internet entrepreneur. He is co-founder of two successful websites CaféMom and Does Something. CaféMom has become the most popular site for women in terms of views.

This site is completely dedicated to mothers where mothers create their profiles and interact and communicate with each other in different ways. She is successful in every career he chooses. He is a great actor, and the richest internet entrepreneur, and also achieved a small amount of success in the world of soccer.