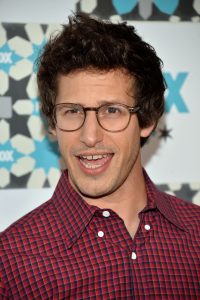 Emmy award and Golden Globe Award winner Andy Samberg is best known as the member of the comedy group The Lonely Island in the United States of America. His other notable contribution to American comedy would be making the SNL Digital Shorts, one of the most popular comedic and musical video shorts in the show, extremely popular with the efforts of The Lonely Island.

Extremely talented and widely admired Andy Samberg was born in 18 August, 1978 in Berkeley, California. He was born to Joe and Marjorie as their one and only son. He was grown and raised in a Jewish family. Since his young age, Samberg was interested in acting and enjoyed comedy shows. He attended Berkeley High School where he explored his interest in creative writing. He graduated in the year 1996.

After graduation, Samberg attended University of California, Santa Cruz. After two years, he moved to New York University from where he graduated in the year 2000. Samberg has majored in experimental films. Samberg began his career with the music video for James Kochalka’s song “Monkey vs. Robot” where he appeared as a monkey.

He is also a YouTube star who used to make comedy videos with his friends Akiva Schaffer and Jorma Taccone. His videos were much more widespread over the internet at the end of 2005. He also had his sketch comedy website TheLonelyIsland.com which helped him and his friends to get hired at SNL. They were widely admired and appreciated for their work and comedy. In the meantime, the trio started to write for Saturday Night.

In the year 2009, they released their debut album, Incredibad. Soon he appeared in number of commercials, music videos and theatrical films. He also hosted many events including the 2009 MTV Movie Awards. He also appeared in That’s My Boy and Hotel Transylvania with Adam Sandler. Samberg also appeared in a BBC Three’s, Cuckoo as Dale Ashbrick in September 2012. On September 17, 2013, Samberg was seen in FOX’s police sitcom, Brooklyn Nine-Nine.

Thirty five year old actor Andy Samberg is married to his girlfriend Joanna Newsom on September 21, 2013 in Big Sur, California. He was engaged to his wife in February 2013 after dating her for five years. He met his Musician wife for the first time in one of her concerts. He is happily married to his wife and has sound relationship with her so this married couple is unlikely to get divorced.

Samberg has no rumors regarding his affairs and relationships. This talented actor is gifted with good looks and commendable height that suits his personality very well. He is 5 feet and 10 inches tall. His attractive personality and his intelligence are his keys to success. He is a successful actor who earns a handsome salary and has a net worth of $16 million.

He has been in the industry with a lot of experience, fans and followers. Within a very short period of time, Andy Samberg is able to make himself establish in this field. He also has appeared in many movies and television series. An actor succeeds his dream when he/she is able to satisfy his audiences with their performance.

Likewise, Samberg is able to satisfy his audiences and viewers. Due to this, he is one of the most admired and desired American actor and comedian. His fans can find his pictures in the internet and also can tweet him in the twitter. Some of his shirtless pictures are posted in the gay sites. Many more about him can be found in wiki.