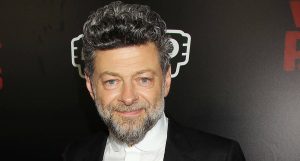 The extremely talented and handsome personality Andy Serkis was born in 20 April 1964. He is a British film director, actor and author who was born and brought up in Ruislip Manor in West London. He was born as one of the five children to mother Lylie and father, Clement Serkis. His father was an Iraqi gynecologist of Armenian ethnicity. Serkis attended St Benedict’s School, Ealing. As he belonged to a good family, he was brought up in a good environment with lots of facilities and opportunities. After this, he attended Lancaster University where he learned visual arts where theater was his secondary subject. During that time, he was a part of the student radio station Bailrigg FM and also was a member of the County College. He was very talented since his college days.

Serkis began his career in his third year of college by joining the backstage team at the local Duke’s Playhouse. After 18 months of acting, he appeared in many plays and had a break though in his acting career by appearing in Bouncers. Then slowly and gradually, he started to appear in many movies and films. Then he appeared in The Winter’s Tale as Florizel and in King Lear as a fool. After settling in London in early 1990s, he appeared in a television film of Oliver Twist. Again in 1997, he was seen in Hurlyburly. Right after that, he appeared in an episode of The Darling Buds of May. In 2008, he appeared in Einstein and Eddington as Albert Einstein and Sex & Drugs & Rock & Roll in the year 2010. After appearing in The Lord of the Rings, he had a breakthrough in his career. He was able to gain more name and fame. Then after he appeared in several movies and gave many hits. He was also awarded and nominated with many awards and was praised for his hard work and dedication. He is well known for his work in King Kong, The Lord of the Rings film trilogy as gollum, Dawn of the Planet of the Apes and The Adventures of Tintin released in 2011. The successful actor Serkis is confirmed to be a part of the main cast of Star Wars Episode VII in 2014.

In July 2002, Serkis married well known actress Lorraine Ashbourne. He is happily married with his wife and is living in Crouch End, North London with his wife and three children. As he has good marital relation, he is unlikely to get divorce. In 2004, he published his book gollum: How We Made Movie Magic.

Serkis is a well known American actor. He is a demanding actor in the America in the present context. Serkis is a friendly and co-operative actor who is able to fascinate his fans through his acting skills and attractive height and body. He is 5 feet 8 inches tall. In spite of being a successful actor, he has many rumors against him. Once he was claimed to be gay which was totally wrong. Serkis earns a beautiful salary and has a net worth of $28 million.

Serkis has number of fans and followers. He is one of the most desirable actor in the America. His fans follow him in the Internet, in his personal sites and other different social networking sites. One can also tweet him in the twitter and find his biography in wiki and shirtless pictures.