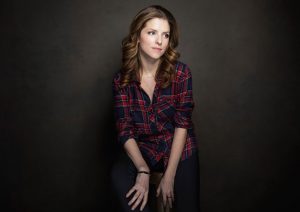 An American beauty, Anna Kendrick, was born in August 9, 1985 at Portland, Maine. She was the daughter of Janice (née Cooke), an accountant, and William K. Kendrick, a history teacher who also works in finance.

She has English, Irish, and Scottish ancestry. She has an older brother, actor Michael Cooke Kendrick, who appeared in the 2000 film Looking for an Echo. She attended Deering High School in Portland.

Anna is a promising young actress who started her career in her early teens. In 1998, she received a Tony nomination for her work in the Broadway musical High Society. She is an American actress and singer. At the very young age of 10 she started her career when she caught a bus from Portland, Maine to New York City to catch her auditions.

In August 1998 (age 12),  Anna’s first acting role was as Dinah in the Broadway – a performance which she won the Theatre World Award and was nominated for a Tony Award and a Drama Desk Award. She was the third youngest Tony Award nominee.

Then she went to appear number of other stage productions which includes A Little Night Music, playing Fredrika Armfeldt in the New York City Opera production.  She was nominated in the Best Supporting Actress category at the 2004 Chlotrudis Awards and Best Debut Performance Independent Spirit Award for her portrayal of Fritzi Wagne.

Then she appeared in her next film, Rocket Science, in which she portrayed Ginny Ryerson, a fast-talking high school debater in 2007.  Later, she auditioned for the role of Jessica Stanley in Twilight (a 2008 film adapted from the first book of the novel series by Stephenie Meyer).  Anna reprised her role as Jessica in the first three Twilight sequels.

Anna is a singer also.  Her singing experience gave her the opportunity to star in The Marc Pease Experience in 2009 where she appears as a high school senior involved in musical theater.  She appeared in the 2009 films elsewhere, in which she plays her first lead character, and in director Jason Reitman’s Up in the Air, based on Walter Kirn’s 2001 novel of the same name. The National Board of Review named her Best Supporting Actress for her role in Up in the Air.  She is also nominated for various critics and academy awards. She reprised her role as Jessica Stanley in The Twilight Saga: Eclipse.

In October 2010, she attended the 2010 Top Glamour Awards in Mexico where she won for “Best International Actress”. In 2011, she starred in the dramatic comedy 50/50, and reprised her role again as Jessica Stanley in The Twilight Saga: Breaking Dawn. Later in 2012, she played Rosie in the screen adaptation of the baby guide what to Expect When You’re Expecting. She also voiced the character Courtney in the stop-motion animated film ParaNorman.

In 2013, she scored a hit song with “cups (When I’m Gone)” from the film Pitch Perfect which became a No. 2 hit on Billboard’s Adult Pop Song chart. The song’s (cups) music video was shot the fourth week of March 2013, and it was directed by Pitch Perfect’s director Jason Moore.  It was released on April 13, 2013 on Anna Kendrick’s vevo channel. Anna made her SNL hosting debut on April 5, 2014 with musical guest Pharrell. Kendrick has a number of projects in the works. One of her next big screen appearances will be in the upcoming comedy Get a Job with Alison Brie and Bryan Cranston.

Anna was only actress of the ‘Twilight Saga’ to be nominated for an oscar, while the ‘Saga’ was still in production. She was nominated in 2010, between the second and the third installments in the series. This American beauty has an amazing personality. Her height is about 5′ 2″ (1.57 m) and her eye color is blue and natural hair color is brown.

Anna dated director Edgar Wright, whom she met during the 2009 production of Scott Pilgrim vs. the World, until early 2013. She got dating advice from George Clooney. In a recent interview with Conan, Hollywood star Anna Kendrick told the stand-up comedian, that Kate Perry finger-banged her cleavage at the 56th Annual Grammy Awards 2014.