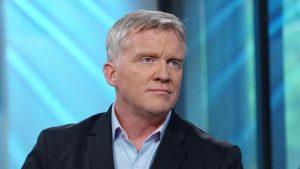 The 46-year-old TV shows and movies actor Anthony Micheal Hall is not dating anybody as of 2014 and 2015, according to various reputed sites. But, are you sure?

If you aren’t, then we are on the same page.

Batman series The Dark Knight, Breakfast Club and Sixteen Candles star Anthony Micheal Hall is reportedly dating Slovakian born- Russian model/actress Lucia Oskerova since 2014. They have attended various occasions as a couple. Recently ( in June,2014), they were spotted at Will Rogers Polo Field in LA.

Previously, he was married to Teresa De Saint from 1990 to 2003. Moreover, he has dated quite a diverse kind of ladies till now such as

Trisha Patayes, an YouTube blogger/celebrity, social magnet, music video artist and part-time model, who is known for her open and expressive personality plus sexy looks. Anthony and Trisha dated from 2011 to 2013.

“for all of you crushing on Anthony Michael hall…this is what he looks like NOW! don’t meet your idols ;)”

The couple picture shows young and energetic Trisha with old and worn out Anthony. Anyway, is it ok to make fun of others because they are getting old?

That’s for you to decide. Now, moving on to the next story,

Sirus Studio host Diana Falzone was reportedly dating Anthony in the year 2009. In November of 2009, their controversial breakup kindly flooded the online media. According to various online media reports, it was a beautiful day of October with kind-cool weather when Anthony’s unkind acts disappointed Diana. It is reported that he not only beat Diana but also shoved and spit at her during the fight.

And, the next day of the shameful incident, cops had to come to the rescue to stop drunken Anthony from harassing Diana. It is reported that cops took Anthony away for investigation when he was banging on the door. The weird part of this story is that Diana is a also self-proclaimed dating expert because of her books such as “How to not date a loser.”

But, the exact source of his bipolar-disorder news comes from a lawsuit by an insurance company against Anthony, which was filed in the year 2003. The lawsuit presented by the insurance company claimed that the production of the television series The Dead Zone underwent a temporary shutdown because of the carelessness of Anthony, The lawsuit claimed that the actor was hospitalized after he stopped taking his medications against bipolar.

To this day, Anthony is silent regarding all of this matter.

Simply, Anthony is a perfect example of what we call “a man of change”. When he was young, he most of the time explored nerdy roles. And, slowly, he transitioned from a promising child actor to an actor who can portray a diverse kind of role. He transitioned from a skinny boy to an athletic man with good sense of humor.

Plus, if you look his dating life, you can see numerous ups and downs. Firstly, his long married life with wife Teresa was unsuccessful. Secondly, he dated many famous personalities and even got into many controversies. And, look at him now. He is again backing to his dating streak with bright face and trademark-killing smile.

Now, moving on to his body orientation, he is a tall man with a height of 6 feet and 1 inch. Although his exact weight is not known, we can guess he has a well-maintained weight simply by analyzing his recent pictures. Furthermore, he has a net worth of around $15 million US dollars.