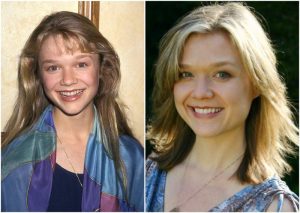 Ariane Clarice Richards is an American actress and professional painter. Popularly known as Ariane Richards, this actress was born on September 11, 1979, in Healdsburg, California, U.S.

Richards began her career at the very early age by appearing as a child actress in movies such as Prancer, Tremors, and blockbuster film Jurassic Park. Her parents are Darielle and Gary Richards. Richards belongs of American nationality and has white ethnicity. She has reached 34 years old in her age now.

Richards graduated with a degree in Fine Art and Drama, with distinction from Skidmore College. She was a brilliant student at school. Later she attended Western Oregon University and also continued her instruction at Art Center College of Design in Pasadena.

Richards made by acting debut by appearing in 1987’s Into the Homeland, starring Powers Boothe. Her big breakthrough came in the year 1994 after appearing in first Jurassic Park film, where she portrayed the role of Lex Murphy. Richards also appeared in the sequel of Jurassic Park named The Lost World: Jurassic Park.

Talking about her television career, Richards appeared in the TV episodes of Empty Nest, The Golden Girls, and Boy Meets World. She also appeared in the first Tremors film and also appeared in its sequel Tremors 3: Back to Perfection. This beautiful lady portrayed the role of a high school cheerleader in the movie Angus. Richards has also done many music videos including “Brick” by Ben Folds Five.

In 1991, Richards won Young Artist Award for Best Young Actress in a Television Movie for her role in Switched At Birth. In 1993, she won The Bambi Award for her role in Jurassic Park. In the same year, she also won the Young Artist Award for category Best Young Actress in a Motion Picture for Jurassic Park. Her voice was also featured in the 1995’s Capitol Critters.

Besides acting, Richards is also a prominent singer. She released her first album named First Love on the Pony Canyon label in Japan in 1993. She also recorded a cover version of David Foster’s “The Prayer” in a duet with Chris M. Allport in year 2008. We can say Ariana as a multi-talented girl, she is also an excellent as well as successful painter.

Her paintings used to be in the style of the impressionists. She became first in the National Professional Oil Painting Competition, for painting Lady of Dahlias in 2005. In 2006, she won Art of the West’s Award of Excellence.

Richards has great sexy body measurements with an appealing height. She has the personality to attract the attention of millions of viewers. This five feet 6 inches tall beauty also does have a pair of sexy exotic legs which are flaunted boldly in her pictures. Richards looks super hot in every dresses she wears especially bikini.

Regarding her personal life, Ariana is dating her boyfriend Wilmer Valderrama since 1999. She is reported to be not married yet. So, the information about her husband, divorce, and other affair is unquestionable. Currently, she is living in Salem, Oregon.