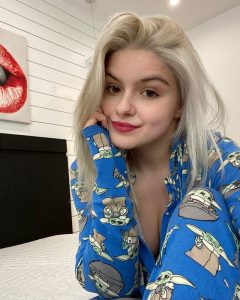 Four Screen Actors Guild Awards winner young Ariel Winter is an American actress and singer well known for her role in the TV series Modern Family as Alex Dunphy. She was born on January 28, 1998 in Fairfax, Virginia, United States as Ariel Winter Workman. She was born to her parents her mother Chrisoula Chrystal and Glenn Workman. She was born and raised in Virginia by her parents. She has one sister and one brother as her siblings. Shanelle Workman is her sister and Jimmy Workman is her brother. She has a bad relationship with her mother and brother. She from her childhood was involved in acting and singing. Winter at the age of 7 had her first role in an episode of television show Listen Up following with the shows Tickle U, Freddie, Monk, Bones and ER. She also gave her voice as in the animated children show Phineas and Ferb. After that she got a role in a show named modern family which earned her four Screen Actors Guild Awards for Best Ensemble in a Comedy Series. Recently she got a role in show Sofia the first in 2012 as lead character Sofia which was premiered in January 2013 on Disney junior.

This young actress and singer have achieved name and fame in short time. Talking about her personal life she isn’t married yet but she has been in some relations. At first she was in relation with Australian actor Callan McAuliffe. They were dating each other from November 2011. Due to some reason they couldn’t be in relation for long time and got separated soon. They both were seen together in several red carpets together and were even seen together at the 201 Primetime Emmy Writer Nominee Receptions. No one knows the reason for their separation as they both looked great together. They didn’t abuse each other.

Currently she has affair with her boyfriend actor Cameron Palatas who came in fame via NICKELODEON-DISNEY CHANNEL-Commercials. They have been together since a long time. They are still dating and together with each other. There is not more information about both of them being in relation but they have been seen together several times. There are likely to be together for a long time as they love each other very much and understand each other. There are not any problems in their relation till today, their relation seems fine and is going smoothly.