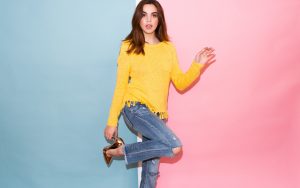 “When you have a movie, you know who they start out as and where they go. But this is constantly changing, and you’re growing with the character.” – Bailee Madison

American teen actress Bailey Madison was born on October 15, 1999 in Fort Lauderdale, Florida, United States.  She is 14 as of 2014. She is the familiar face of cute and innocent May Belle Aarons in the American drama fantasy film Bridge to Terabithia. The role of May, as the younger sister of the lead character Jesse Aarons, aka Josh Hutcherson was successful in attracting loads of viewers for the movie because of her cute smile, innocent looks and smooth dialogue delivering capabilities. Nevertheless, she is also recognized for portraying the role of Saile Burst in the horror film Don’t Be Afraid of the Dark and Maggie in the Adam Sandler film Just Go With It.

She is regarded as one of the most popular young actress in America not only because of her acting abilities and achievements but also because of her mature personality and charming smile. She knows complexity of her profession and that’s the reason why she wouldn’t rush into roles which would be in-appropriate for her family and friends to watch.

Wikipedia’s biography on her describes her as the youngest of seven children i.e. she has four brothers and two sisters. Her older sister Katlin Riley is also a famous American actress. She got into acting industry at the early age of five because of her mother and sister who used to do commercials at the time.  But her real on-screen career started from an Office Depot commercial when she was just 2 weeks old.

Others wiki on her professional life and personal life can be extracted from Wikipedia’s biography on her.

It is a true fact that her current last name Madison is just a stage-name given to her. Her original name is Bailee Williams-Holte and  her mother name is Patrica Riley. Her father name is not known but it is said her mother Patrica was previously married to a man named Holt Williams. Currently, her mother is married to Mr. Riley, whose name is not revealed in the media.

Because her biological father exact name is not revealed in the media, many people in the United States believe that she is an adopted child. Another prominent theory on this issue projects Bailee current dad M.r. Riley as her step-dad.

Nevertheless, from time and again, she in many interviews has said that she is always thankful to her parents, friends, and anybody who has been the part of her life.

She has just reached her teen years, so she doesn’t have a boyfriend yet nor there has been any dating affair of the lovely actress in the past. She is not so tall with the height of 4 feet and 9 inches. However, her height will probably be growing in upcoming future. Also, other prominent reason of her growing popularity is her sweet-girl look that she derives from her charismatic smile and short-height.

There are some insightful interviews of Bailee on the web one would like to view. Following link is suggested to the audience:

The way American teens look at Bailey is very promising. They find inspirational figure in Bailey. At the age of 14, she has achieved the level of achievements that only experience actor or actress in the industry posses. Also an internet sensation Bailee has 278 k twitter followers. Her twitter tweet name is @BaileeMadison and her twitter description is:

Last but not the least, one can find more info about her in details via her official site and from few other of her fansites plus interviews on the internet. Also, dont’t forget to follow her in instagram to get timely pictures post from her.