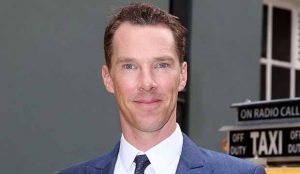 Benedict Cuberbatch was born in 19th of July, 1976 in Hammersmith, London. His birth name was Benedict Timothy Carlton Cumberbatch. He is an English actor as well as a film producer. He has performed in many movies, television, radio as well as the theatre. He is best known for his roles in the TV series “Sherlock Holmes” where he has portrayed Sherlock Holmes himself. He is the son of actor Timothy Carlton and actress Wanda Ventham.

He has started his career from 2000. He has received the Master’s Degree in Classical Acting for the Professional Theatre at the London Academy of Music and Dramatic Art. This is the only drama school of UK. He has also appeared in the movie “Hawking”. He met the professor twice to prepare for the role. This movie was released in 2004 and he got highly praised from his acting.

He is a huge fan of Robert Downey Jr. to whom he also shares the iconic character of Sherlock Holmes. He lost the notable amount of weight for his role as Sherlock Holmes. His goal was to portray Holmes as a character with such a high intelligence that it could manifests itself in a physical and mind over matter sort of way.

He was a very athletic person before pursuing his career as actor. He painted oil canvasses and also the member of the rugby team when he was studying at the Harrow. One of his first ever acting roles was playing Titania when he was only 13 years of age. He is very famous for his Alan Rickman impression. Because of his work in the play “Hedda Gabler”, he was nominated for a Laurence Olivier Award for Best Supporting Actor in 2005. Though he has pursued his career in acting, he originally wanted to pursue law in the university. In 2013, he was included in Entertainment Weekly’s New Hollywood feature.

He is a tall guy with the height of 6 feet. He has reached the age of 38 from 2014. He is fond of extreme sports such as hot air ballooning, skydiving, scuba diving, high speed motorcycling and skiing. In 1999, he began dating actress Olivia Poulet to whom he met a t the university. Their affair broke up after 12 years of relationship. After Poulet, Anna James became her girlfriend. But unfortunately, they were also separated in 2012. In question of the marriage, he said that he wanted to be a married person with whom he can share his all the feelings. He does not want to get divorce after marriage. Hope, he will get his desired wife soon!!!

Many believe him as a gay because of his characters and the body structure. He thanked his parents as they were the one who helped him to pursue in his career. He has also appeared in many TV shows. He also got chance to be in the crew member of Hobbit. In 2005, he with his 2 friends was smudged by the group of locals in South Africa. In the end, abductors drove them to the unsettled territory and set them free. His eyes were so captivating that many girls have been her fans. He has the net worth of $35 million.

To get more information about his biography, you can visit wiki and other related sites. His shirtless pictures are also available in the web. You can also follow him through twitter and Instagram.