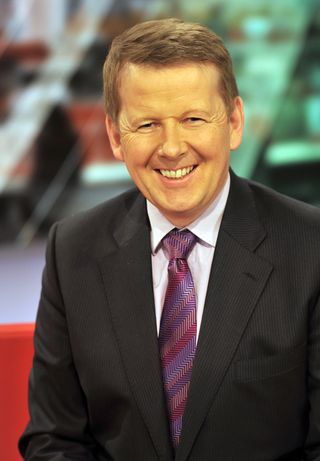 A British Journalist and presenter Bill Turnbull were born on 25 January 1956 in Guildford, Surrey, England, UK. He is popular among people for presenting BBC Breakfast. His birth name is William Robert Jolyon “Bill” Turnbull.

He was enrolled at the Eton College in Berkshire and later at the University of Edinburgh. At the University he worked as the editor of the student magazine. He has now reached 58 years old.

Bill started his career at the Scottish local station Radio Clyde in 1978. Later in 1968, he joined the BBC network as a reporter for the Today Program, and in 1988 became the reporter for the Breakfast Time.

In 1977, he became one of the main presenters on BBC News 24 based in the UK, alongside Valerie Sanderson. He was also the one to cover many domestic as well as international news including reports of over thirty countries. Bill also used to present the regular programs on Radio 5 Live.

Turnbull presents BBC Breakfast alongside Sian Williams initially and later with Sarah Montague, Mishal Hussain, carol Kirkwood, and Susanna Reid in 2001. He also appeared as a relief presenter of News at Six and News at One.

Turnbull is also popular among people for his TV appearances. He was the contestant in the 3rd series of Strictly Come Dancing 2005, a BBC dancing competition, partnered with Karen Hardy.

Despite being injured in the second week, Bill acquired the sixth position out of twelve contestants. He also participated in and won an episode of BBC Celebrity Game Show School’s out broadcast on BBC One and in 2007 appeared in a game show Who Wants to Be a Millionaire? Alongside his co-presenter is sian Williams.

Turnbull along with Williams also won the BBC show Pointless and gave the money to the charity. In 2012, Bill also appeared in the Music video of Professor Green, and the following year, he appeared in the BBC’s flagship religious program Songs of Praise.

He also had other TV appearances in the shows including Smart, Celebrity Mastermind, Around the World, Would I lie to You? The Wedding of River Song.

His hobbies are beekeeping, dancing, and running. As Bill is much interested in bees, he published the Bad Keepers Club. This book was about the ups and downs of beekeeping.

He also participated in London Marathon and Great North Run several times. He also received an honorary doctorate from the Bucks New University.

Regarding his personal life, he married Sarah McCombie in March 1988 in the London Borough of Hackney. The couple is also blessed with three children including two sons and a daughter.

Bill along with his wife and children live at Rainow, Chesire. The name of their sons is Henry and Will and their daughter’s name is Flora.

Bill is one of the journalists who has reached a great height of success and more than three decades of experience. He receives a good salary but has not disclosed his net worth to the media to date.

His updates can also be known by following him on Twitter and Instagram. His page can also be liked on Facebook. His twitch can also be watched on YouTube. Bill’s biography can also be accessed via wiki and IMDB.