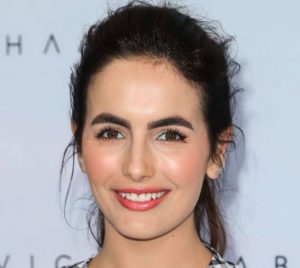 Camilla Belle (birth name Camilla Belle Routh) was born in October 2, 1986 (age 27 years) to Cristina Gould and Jack Wesley Routh in Los Angeles, California. The father of this American actress owns a construction company and was a composer of country music whereas her mother is a fashion designer.  Belle has a mixed ethnicity.

Her father has a English, German, French ancestry where as her mother belongs to Portuguese- Brazilian and Italian ancestry. Raised in Catholic background she attended St. Paul’s Catholic Elementary Schooland then the Marlborough School, which is an all-girl high school in Los Angeles.  She speaks Portuguese and Spanish and English frequently. Belle started her relationship with Joe Jonas In October 2008.  She had been dating him after she stared Joe’s band’s music video for the song “Love bug”.

In July 2009 she broke up with her boyfriend. Camilla Belle was born to be an actress.  She started her professional when she was nine month.  She appeared in a national print commercial advertisement before the age of 1. She did her first film at the age of five.  She was cast as a lead role in NBC’s thriller, Trapped Beneath the Earth and also in Empty Cradle in 1993.  She played a small role in A Little Princess – film production of the novel, staring Liesel Matthews. In 2000 she played a lead role in Rip Girls.

She took a break for completing her studies and returned in the remake of “When A Stranger Calls”. Then after that she was casted in the feature film 10,000 BC which was directed by Roland Emmerich. This film was about prehistoric humans. She did a sci-fi thriller Push which was a big hit. She was casted as Kira Hollis in this film. She also played Aubrey Shepard on the Focus on the Family radio drama Adventures in Odyssey. In 1998 she did The Patriot where she played a role of Steven Seagal’s daughter.

In 1998 she played a character named Sandra Bullock’s girl in Practical Magic.  She earned a 1999 Youth in Film Young Artist Award nomination for this act and also in the same year she was nominated for her guest appearance on the TV series Walker: Texas Ranger. For 1999 “Replacing Dad” and 2000 “Rip Girls”, she received third and fourth Young Artist Award nominations.

In 2005, The Ballad of Jack and Rose movie she was the lead role. From 2006 to 2008, she walked in her mother footsteps and modeled for Vera Wang’s Princess fragrance. In 2010, she appeared in Breakaway with Vinay Virmani which was directed by Robert Lieberman. She did number of movies. This hot American Beauty is 5 feet 8 inch (1.73 m) tall.

Belle trade mark is her dark, defined eyebrows.  She has been featured with more than forty hairstyle ( long, med, short hair, half up half down, flip, long wavy etc.). She looks equally lavishing in every haircut and makeup.

She Likes Brazilian food: feijoada (typical plate made with pork and beans), pão-de-queijo (typical bread made with cheese) and brigadeiro (sweet made with chocolate). Belly is also involved in various charities. She is an international spokesperson for “Kids With A Cause” which is created to provide a helping hand to children suffering from poverty, hunger, lack of education, neglect or abuse.