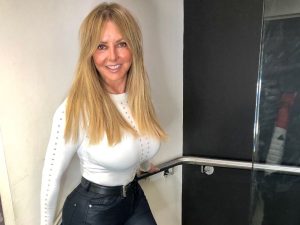 Carol Vorderman was born on 24 December of the year 1960. She is a Welsh media person, and is best known as the co-host of the popular game show named Countdown for 26 years, from the year 1982 until late 2008.

Vorderman’s career started its pace in 1982 when she joined the popular station Channel 4 and its game show Countdown. She was the co-host of the show most recently with Des O’Connor; prior to that she co-hosted with Des Lynam and Richard Whiteley. She left the game show in the year 2008 and was soon replaced by Rachel Riley. Whilst appearing on Countdown, Vorderman also began hosting other shows for a variety of broadcasters including Better Homes and The Pride of Britain Awards for ITV. She as well hosted shows such as Have I Got News for You, The Sunday Night Project and Lorraine being a guest.

Vorderman has been a co-anchor of the ITV lunchtime chat show loose women since the year 2011, shortly after her career started as a freelance presenter, where she anchors the program sometimes when Andrea McLean, Ruth Langsford and Kaye Adams are not present. She presented a cookery series for ITV constituting 8 episodes named Food Glorious Food in the year 2011.

Vorderman’s first employment was as a junior civil engineer at Dinorwig Power Station in Wales and later she managed to be a graduate management trainee in Leeds. In her spare time she was briefly a backing singer in her leisure time along with her friend Lindsay Forrest in the Leeds-based pop band Dawn Chorus and the Blue Tits, whose front vocalist was DJ Liz Kershaw. They hit the charts during the early 1980s. Dawn Chorus and the Blue Tits recorded songs such as “The Undertones’ hit Teenage Kicks.” During the year 1984/85 she made regular appearances on the Peter Levy show on the popular station Radio Aire, appearing in a mid-morning show to read a story for any pre-school children.

Vorderman’s mother noticed an advertisement in a national paper asking for a woman with good math skills to work as co-host on a quiz show for the fledgling fourth terrestrial channel and applied on behalf of her daughter, when Carol was aged 21. Vorderman was the first woman to appear on Channel 4; she appeared on Countdown with Richard Whiteley from 1982, until Whiteley died in June 2005, and with Des Lynam then Des O’Connor, until late 2008.

Vorderman appeared on her last show in Countdown on November 13, 2008 and it was published in the media on 12 December 2008. A special show named One Last Consonant was hosted by Brandreth, featuring Vorderman’s highs and lows and fakes during the 26 years of the show, was also filmed and broadcasted just before her final Countdown appearance.

She is hot and sexy and her breasts are big and bulky. Having beautiful legs and feet along with perfectly sized bums and boobs on her body, she has established herself as a sexy TV personality. She has tried a detox diet on herself and her daughter says she looks so young she becomes jealous of her. Her sexuality is admired all over and her body measurements of 34-28-35 inches make her look more attractive. She is popular on social media and her wiki and twitter accounts contain her dynamic information. She has been rumored of having a plastic surgery but she refuses and shows her naturally sexy appearance on TV which is the daily diet for many men in the UK.