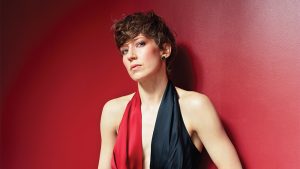 “When I look back, I always say, ‘Oh, I never thought I’d be an actor,’ and my parents always say, ‘Really?’ I have this image of myself as a sort of quiet, observant little girl, and they’re like, ‘No, no, no. You were bossy,’ and all these other things, so I guess I did sort of have an eye on it. I’ve never felt terribly attached to acting because I always feel like the world is really big and really interesting, and there are a lot of places that I can put my energy and be fulfilled.”

Carrie Coon is an American actress who was born in January 24, 1981 in Copley, Ohio. Her birth name was Carrie Alexandra Coon. She was nominated for a Tony Award for her performance in “Who’s Afraid of Virginia Woolf?”. She also appeared as Nora Durst in the HBO drama series in 2014. She is also set to portray the role in thriller movie “Gone Girl” which will be released in 2014. She has also been appeared in many successful movies.

She has started her career from 2006 and as we can see, she is actively participating in this field till now. In the same year, she earned the M.F.A in Acting from the University of Winconsin Madison. She also spent the four years acting with the American Players Theatre before moving to Chicago. Coon began to appear in the show with the Steppenwolf Theatre Company after shifting to Chicago.

She has appeared in many stage shows. Some of the famous were Our Town, The Diary of Anne Frank, Anna Christie, The Night of the Iguana, Measure for Measure Julius Caesar and Romeo and Juliet. In 2010, she got chance to work in the team member of “Who’s Afraid of Virginia Woolf?”. She starred in the role of Honey there. In 2013, she made her Broadway debut in the same role. She was nominated for the Tony Award for Best Featured Actress in a Play. She also won the Theatre World Award.

Her acting capabilities have made her one of the successful actress in this industry. But her body measurements has also influenced many to follow her. She has maintained her body properly. Her hot and sexy body has captivated many eyes. She has just reached the age of 33 and she is 5 feet 5 inch tall. She has married with playwright Tacy Letts in 2013. They are happily married. So, divorce is out of the question. As both husband and wife love the children, they want to have the baby soon. There has also been the gossip that Coon has been pregnant in 2014. Hope, we will get the good news soon!!!

She has made herself perfect to act on different possible roles. As she believes in making oneself better from the comments, she has been regularly using twitter, Facebook and Instagram. She wanted to find out her weaknesses so that in coming years, she will improve in it. This gorgeous beauty has the net worth of $7 million. After crossing many hurdles in her life, she has been able to cope with the environment and also achieved the height. She is a kind of person who is not worried about anything. She said that acting is a fun and she had to remind herself that how long she has been doing it.

To get more information about her biography, you can visit wiki as well as IMDB. You can also find her hot pictures in the web. To know about any celebs, please do visit us.