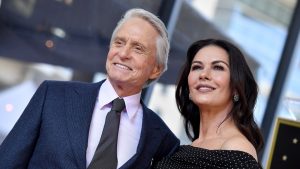 “I may be the first actress to admit that beauty doesn’t hold you back. I think beauty is a gift that you have to make the most of. I’ve worked hard at trying to look my best.” – Catherine Zeta-Jones

Catherine Zeta Jones, is a Welsh actress especially known for her  roles in reputed movies such as The Darling Birds of May, The Mask of Zorro, Entrapment, Traffic, Chicago, Intolerable cruelty, Ocean’s Twelve, The Legend of Zoro, Death Defying Acts, Side Effects and in theatrical musical A Little Night Music.

Sizzling Catherine Zeta-Jones gets easily noticed in public because of her distinct appearance. Her dark eyes, dark hair, curvaceous hourglass shaped body and charming face are major magnetic part of her physical sex appeal. She is a confident and hot woman who lives her life in her terms. She has straight-forward personality, dazzling eyes and an awesome physique. Her distinct looks derives from her mixed ethnicity. Her father is of Welsh descent, while her mother is of Welsh and Irish descent.

Catherine got back with her ex-husband in late 2013. Catherine wedding with Michael Douglas took place on 18 November 2000 in New York City. When they got married, Michael got lot of criticism because his divorce with her first wife Diandra Luker has just been 2 weeks. The divorce of Micheal and Diandra was one of the most talk-about topics in American show-biz media in late 1990’s and early 2000’s. It is said that the divorce case settled after Diandra got $45 million from Michael. Diandra is 13 years smaller than Douglas and Catherine is 25 years smaller than Douglas.

It is no secret that Michael and Catherine are crazy in love with each other. They first met in August 1998 in Deauville Film Festival in France. They were introduced by Danny DeVito. They started dating in March 1999 and they got engaged on 31 December, 1999. But in August 2013, their more than a decade long marriage ends. Many popular rumors then mentioned the major reason for separation of Catherine and Michael to be their busy time schedule.

“After Zorro, People spoke Spanish to me for ages, I am Welsh but that movie gave me a new ethnicity” – Catherine Zeta-Jones

She is an actress who is known for choosing intelligent scripts. Oscar, BAFTA and SAG awards winner Catherine’s more than 14 years of professional career shines as bright as the sun with lots of achievements like working with many reputed directors and actors. It’s no wonder her net worth is currently valued in the range of 50 million to 100 million dollars.

Talking about numbers, her body measurements are equally persuasive like her net-worth. With fit body measurements of 37-24-36 inches and tall height of 5 feet and 5 inches, Catherine is regarded as a queen of beauty. As of 2014, her age is 44. But, she doesn’t look like someone on her 40’s; instead she looks like someone who is young, a beautiful woman on her 30’s. Her real age is 44 as of 2014. Her legs are nicely shaped and toned. She has hot physique because she likes to take care of her body. On top of that, she knows to appreciate her body and take a good care of it. She is considered one of the sexiest actresses of her times; still, she can take your breath away. There are nude scenes and hot pictures of the talented actress, which one can definitely view online.

It’s still not revealed whether she has gone through any plastic surgery or not. Anyway, it is believed that she is a frequent user of Botox, but the rumor can’t be verified as well.

Even after being mother of two children, she has managed to get a fit physique. To know more about sexy Catherine, one can always visit Wikipedia’s biography on her.