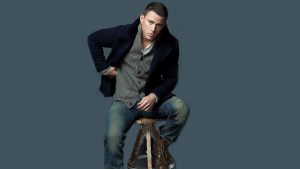 Channing Tatum is an American actor, film producer, dancer, and model. He was born on April 26, 1980 in Cullman, Alabama to parents Kay and Glenn Tatum. He is well known among people for his roles in blockbusters like Step Up (2006), G.I. Joe: The Rise of Cobra (2009), Dear John (2010), The Vow (2012), 21 Jump Street (2012), and Magic Mike (2012). Tatum has English, Scots-Irish, Irish, French, German, and Native American ancestry. He grew up in the bayous near the Mississippi River. Tatum belongs to American nationality and has a white ethnicity. He has reached 35 years old in age now.

Initially he attended Gaither High School. He was grown up athletic, playing football, soccer, track, baseball and martial arts. He also practiced Wuzuquan Kung Fu in his childhood. Later, he attended Tampa Catholic High School, where he graduated in 1998 and was voted most athletic. Again Tatum attended Glenville State College in Glenville, West Virginia, on a football scholarship, but dropped out. He also began to work as a stripper at a local nightclub. Then, he made a movie of his own experiences as a stripper. The movie was named Magic Mike.

Tatum first appeared in a TV as a dancer in Ricky Martin’s music video “She Bangs”, for which he was paid $400. He also did modeling for Armani and Abercrombie and Fitch as well as appeared in campaigns for Abercrombie & Fitch, Nautica, Dolce & Gabbana, American Eagle Outfitters, and Emporio Armani. Tatum also appeared in many commercials including Mountain Dew and Pepsi in 2002. Later, he was also signed with Beatrice Model agency in Milan, Italy and Ford Models in New York City.

Channing appeared in movie Stop-Loss in 2008, which is about soldiers returning home from the Iraq War. He also appeared in film Battle in Seattle, about the 1999 protest of the World Trade Organization meeting in Seattle. Tatum was also seen in a drama Public Enemies, playing the 1930s American gangster Pretty Boy Floyd. Tatum starred as Duke in G.I. Joe: The Rise of Cobra. He portrayed a soldier in Dear John, a Screen Gems film based on a popular Nicholas Sparks bestseller.

In 2012, Tatum hosted Saturday Night Live. Tatum also co-starred in Steven Soderbergh’s Haywire, The Vow with Rachel McAdams, and 21 Jump Street with Jonah Hill. Tatum along with his friends and wife Jenna Dewan started two production companies, 33andOut Productions [33] and Iron Horse Entertainment. Their first production was the documentary, Earth Made of Glass.

Tatum has a macho body built with a height of 6 feet 1 inch and his weight is 83 kg.

Talking about his personal life, Tatum met Jenna on the set of their Step Up. After few years of dating, the couple were engaged in September 2008 in Maui, and married on July 11, 2009 at Church Estates Vineyards in Malibu, California. The couples were blessed with a daughter Everly. This proves that he is not a bisexual. Tatum and his wife also have matching tattoos. Because of his hard work and determination, Tatum is also one of the highest paid actors in the industry and has a net worth of $14 million. Once there was a rumor that Tatum was dead in a snowboard but this information was 100% false.

Other information about him can also be found in his personal sites and official sites. His short biography can be accessed via wiki and imdb. His filmography and quotes is also listed in Wikipedia. His official fan site is channingtatumunwrapped.com/fans/fan-club/.