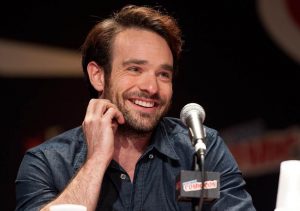 Charlie Thomas Cox is an English actor who was born on the 15th of December 1982 (his age is 32 years old) in London, England. He was the youngest child, out of 5, born to Trisha and Andres Seaforth Cox. He was brought up in a religious family and was a regular at the church. His parents were Roman Catholic. As a child, he had the chance to learn in two separate schools. His first school Ashdown House School was located at East Sussex where he studied till grade four.

Then, his father was moved to Dorset and so the family moved there and he studied at the Sherborne School. It was there that got involved into acting and took acting classes after school hours. He also did a couple of school plays and also on the church stage.

There, he was appreciated widely for his part and his parents learning the potential of their child supported him. After high school was over, he started to train at Bristol Old Vic Theatre School.

Charlie Cox isn’t the tallest of man/ His height in terms of centimeter is only a 178 cm, which is about 5 feet and 10 inches. He is a handsome young man and has got a very nice body. He used to be a bit chubby as he was young, but gradually grew more conscious about his health and started to maintain it. He does regular exercise and workout in the gym. That way, he has achieved a fine muscular and athletic body which he isn’t shy to reveal.

So there is no question of him getting divorced. He doesn’t have a long list of girlfriends however. He was linked with actress Lynn Collins in the year 2004, when the couple were seen dating together in many places. We don’t know when that affair ended up but we do know that he also dated another actress Kate Mara, between 2008 and 2010. Maybe he hasn’t fund the right type of girl and as a result, is still single. He certainly isn’t gay, as he is accused to be.

Charlie is a very versatile actor and he has got his works to show for it. Although he started pretty late, but his effort towards making any role near perfect has made him a successful actor. He has started in a lot of movies and TV series. Some of his movies include Stardust (2007). Then in 2008, he played in the movie Stone of Destiny as a character named Ian Hamilton. When he made his debut in The Collection by Harold Pinter (the show was held at Ambassadors Theatre), the same year he played in the TV series Downton Abbey as the duke of Crowborough.

His other famous roles include in films and series like The Prince of Homburg, There Be Dragons, Daredevils etc. He was casted as Owen Slater in the 2012 TV series named Broadwalk Empire.

With his hard work and effort put in, he has earned himself lots of fans and a fortune of money. His estimated net worth is about 9 million US dollars, that was in 2013. To know more about Charlie, you can read about his biography in pages like IMDB or Wikipedia. You can also follow him on twitter.