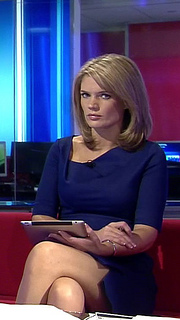 Well known British English news reader and English television presenter Charlotte Hawkins was born in 16 May, 1975. The presenter of ITV Breakfast and Good morning Britain Charlotte Hawkins is well known for her work throughout the America. She had a pleasant childhood and was brought up by her parents in Chichester, West Sussex, England.

She was very pretty and attractive since her childhood and still is. Her charm and charismatic eyes are the point of attraction towards her. It was her childhood dream to appear in the television and finally she appeared as the journalist, presenter and a news reader.

During her childhood, she attended a school in Chichester named Bishop Luffa School and then she joined the University of Manchester for the graduation where she graduated with a BA in English literature. Later on she joined London College of printing for postgraduate diploma in broadcast journalism.

News reader Charlotte began her career in the year 1999 as the news reader and reporter for LBC Radio. Therefore she started her career with well-known ITN at the age of 24. She then moved to ITV Meridian in the south east where she was appeared in The Big Story which is a hour long current affair series in the beginning of the year 2000.

After working for three years in meridian, Hawkins left for Sky News in January 2007. She was seen in the Sky News in the programs like Sunrise, Five News in the absence of Matt Barbet. She was again seen in ITV in the year 2007 in The London Boat show. She left the show sunrise in March 2014. In the same year in third march, Hawkin was announced to be a presenter in the programs like Good Morning Britain and ITV Breakfast.

On 6 March 2014, she showed her last appearance in the Sky News and after this she started to appear in Good Morning Britain on 28 of April 2014 and ITV Breakfast. She is currently hosting the show with her co-host Ben Shepherd, Sean Fletcher and Susanna Reid. One can see her program every Monday, Tuesday, Wednesday and Fridays from 6-8:30 am.

Charlotte Hawkins is a popular news reader who loves dancing, horse riding, sailing, cycling and loves to spend her spare time with her family and friends. She also loves dogs and also supports Dogs Trust charity. Including this charity, she is also seen in many other charities like Motor Neuron Disease Association.

She is associated with this association just because her father was the victim fighting against the same disease. 39 years old Charlotte Hawkins is not only appeared in the television as the news reader but also as a social worker.

She is a woman with kind heart and sweet voice who was married to Mark Herbert in the year 2008. She has a good relation with her husband so she has no divorce with her husband. Her wedding pictures can be seen in internet.

Due to her hard work and contribution in her field, she is very much demanded news reporter and anchor. She has an attractive body with a sexy legs and feet which look more attractive and sexy in stockings. Her hot body and her flawless speech are her plus points.

She looks very gorgeous and hot in tights. Her body measurements are not determined but seeing her photos and her in the television, we can say that she is a lady with brown hair and attractive height but isn’t tall enough in comparison to her lady co-hosts.