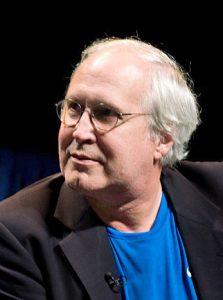 Known for his versatile talent, Chevy Chase has always been one of the phenomenal actors in Hollywood industry. His birth name is Cornelius Crane Chase and was born in 1943 in New York City. He has worked as standup comedian as well as appeared in many movies and TV series. He is excellent in sketch comedy, slapstick, improvisational comedy, acting as well as writing.

He was influenced by his father in his early age, Edward Tinsley Chase, who was a book editor as well as magazine writer. He is a graduate student of Stockbridge School where he improvised himself in slapstick and the physical humors. He started his career in early 1960s when he wrote for Mad Magazine. His writings impressed the editor of the magazine and he wrote regularly for the magazine. He has also worked in the radio. He was the cast member of the popular “The National Lampoon Radio Hour”. His work in “Saturday Night Live” was the memorable one where he was the original cast member of the show. Though he was loved in the show, he became one of the first cast members to leave SNL in 1976.

He has appeared in many TV commercials as well. The most popular one among them was “Chase Manhattan Bank”. He made his debut in the movies from “Walk… Don’t Walk” in 1968. In 1978, he played the role of Tony Carlson in “Foul Play” from which he got nominated for Golden Globe Award for Best Actor in Motion Picture. Till now, he has appeared in more than 50 movies. Among them, the popular ones are “Memoirs of an Invisible Man”, “Man of the House”, “Orange County”, “Lovestick” and “Before I Sleep”. From the movie “Memoirs of the Invisible Man”, he got nominated for Saturn Award.

He is more popular from his work in TV shows. He came to the existence in TV from his writing skills in “The Smothers Brothers Show”. From his first work, he got nominated for Writers Guild of America Award. From his roles of different characters in SNL, he has won Primetime Emmy Award for two times. Moreover, he has written many TV movies which became popular among the audiences.

He is a tall guy with the height of 6 feet 3 inch and has the weight of 80 kg. He got married for three times. He first got married to Susan Hewitt in 1973 but got divorced in 1976. In the same year, he got married to Jacqueline Carlin but this relationship also lasted for only 4 years. He then got married to Jayni Chase in 1982 and till now they are happily married. The couple has three children. His wife says that the cooperation and trust has made their relationship even stronger.

Chase is popular in the social networking sites such as Facebook, twitter and Instagram. He has the net worth of $312 million and has the apartments in various major cities as well. The library has been established in his name and you can know more about it in http://dclibrary.org/chevychase. He has also established restaurants in New York City. As he has dedicated his young life in this field, he has always supported it by including himself in it. Do not confuse you with weather reporter whose name is also Chevy Chase. You can find more information about his biography in IMDB and Wikipedia.