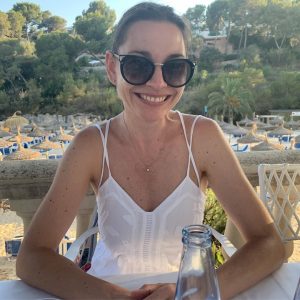 The major reason to watch hln in weekday and cnn in weekend for many people, beauty with brains Christie Paul is a weekday news anchor for hln and weekend anchor for cnn’s New Day.

hot and beautiful with her body measurements of 32-26-35 inches, long exotic legs and long blonde hair, Christie is also known for being very poised and articulate. Her ratings in cnn are very high as she is the favorite one of many people in the long list of talented and beautiful CN anchorwoman. She’s doing very well as far as turning men on via wearing tight skirt and crossing legs, ultimately exposing her hot legs. Sitting next to her, fellow male-news anchors must have to really focus to not stare at her legs.

All her outfits and mannerisms have attracted lots of viewers wherever she goes. For her, it’s not only about being a good-looking sexy woman but also about being a best anchorwoman and indeed a proud woman. Her fans admire this quality of Christie and enjoy getting news from her. She has made many wives and girlfriends jealous because of their partners staring at her like she is some goddess of beauty and knowledge.

Her good manners derive from her religious Christian family. University of Toledo’s bachelor degree in broadcast Journalism holder and “Outstanding Almuna” of the university, Christie became a multi-tasking employee in WDTV in West Virginia soon after the graduation. WDTV’s career of her was very productive because she worked as the channel news anchor, editor, photographer and reporter, which helped her to understand entire process involved in news making and broadcast journalism.

She then proved her broadcasting journalism capabilities in Phoenix as an anchor, consumer reporter and weathercaster. Her work at KNXV is widely adored by her fans. Moreover, after KNXVX, she worked at cnn affiliate KTVK, where she created a unique segment with the Arizona Humane Society which connected hundreds of abandoned animals to families in the valley. And even before KNXVX and KTVK, she worked as an anchor/reporter for KTVB in Boise, Idaho. In KTVB, she was noticed and honored by the Idaho Press Club for creating string series of stories about a 4-year old girl who went through 5 organ transplant.

She is now happy with her married life with her husband Peter Paul since 2003, which is the year of their marriage. But her first marriage didn’t result into such happy ending. She has covered many tragic domestic violence cases in her career, but it was her own book “Love Isn’t Supposed to Hurt”, which she chose to finally share about her bad marriage with her first husband Rob Koebel. The book portrays her emotional journey as an abused wife who at last files for divorce because of the husband Rob abusing her verbally and emotionally far beyond the point of tolerance.

The book became so popular that most critics rated it 10/10. She has now established herself as a source of inspiration for many women suffering from such abuse. She chose to breakout getting a divorce than being emotionally broke staying married to Rob. The book was successful to come in the list of the best-selling books of the year upon its release.

6 feet tall in terms of height, Christie, 45, is a former Miss Mansfield (Ohio). She has been Miss Greater Cleveland from 1991–92 and third runner up to Miss Ohio, 1993. With all of these achievements and happy married life with three children, she is now enjoying her life and career. She can even dance and sing perfectly. She would definitely be a good role model and a good teacher to her children plus a good mom.

There has been no affair of her beside above mentioned. One can connect with her in the popular social networking site like twitter, to receive tweets from her. One can also view her numerous pictures on the internet.