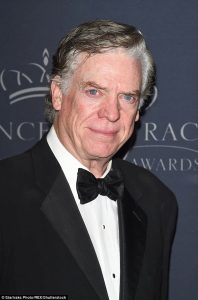 “Actors think the grass is always greener. When you do a play, you wish you could be making easy money doing a film, because you work your butt off on the stage. Then you do your television and say, ‘God, if I have to do this one more time, I’ll just go crazy.’ I think any actor would rather do quality work than the episodic TV which pays the rent.”

Often known for his roles as an arrogant villain, Christopher McDonald has made himself one of the reputed actors in the Hollywood industry. He is an American actor who was born in 15th of February, 1955 in New York City, New York. He is popularly known for his role as Shooter McGavin in “Happy Gilmore”. His other popular roles are Allen in HBO film “61*” AND Tibbons in “Requiem for a Dream”.

He has started his career from 1974 and he is actively involved in this field till now. He has done numerous movies and TV roles. He acted mostly as a supporting actor and often portrayed antagonistic characters. His popular movies are The Boys Next Door, The Faculty, House Arrest, The Perfect Storm, Dirty Wark, American Pie 5: The Naked Mile, Spy Kids 2: The Island of Lost Dreams and Broken Flowers. In 1994, he was starred in the film “Terminal Velocity” where he appeared as Russian mafia villain alongside with the Charlie Sheen. He also got chance to work as the cast member of the movie “The Dating Game”.

In terms of television, he has appeared in various television series such as North Shore, Good Advice, Family Law and Veronica’s Closet. He has also made guest appearances in Cheers, Knight Rider, Home Improvement, Las Vegas, The Twilight Zone and Star Trek: The Next Generation. His work also include the determined government agent Kent Mansley in the animated movie “The Iron Giant”. He has also voiced Jor-EI in Superman: The Animated Series.

He has almost reached the age of 59. But he seems a lot much healthier. He is a tall guy with the height of 6 feet 3 inch. He accepted Lupe Gidley as his wife and married in 1992. Their relationship has always become stronger in these past years. The couple has four children. Because of their trust and co-operation to each other, they had not any difficulties in their life and there sure won’t be any divorce between them.

Other than his acting, he is also an avid pilot. He enjoys racing cars and has raced in the Long Beach Grand Prix as well as on the tracks in Germany. He also enjoys skiing and fishing. He is an Irish American by nationality. He follows the Christian religion and he follows his ethnicity quite strongly. He has the net worth of $43 million. He is also present in the social sites such as twitter and Facebook. He has a large number of followers in both the sites. Since he has lost the 2 siblings and a parent because of cancer, he has been an active supporter of the Make a Wish foundation along with the charities which help the cancer research.

If you want to know more about him, you can visit wiki. His movies are also available in the YouTube. If you are real fan of his acting, you can follow him in Facebook or twitter. To get more information about any celebs, always remember us.