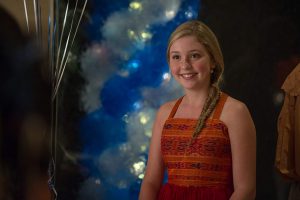 Cozi Zuehlsdorff is an American actress, singer as well as pianist who was born in 1998. She began her acting career at the age of eight when she was encouraged to audition for Annie in the local theatre company in Aliso Viejo. At that time, she thought that it would be more fun to see the musical rather than to be in it. But she ends her decision to the audition. Then, she was cast as Annie and has been hooked on musical theatre ever since.

To name a few among her acts in the theatre, she has played Dorothy in the Wizard of Oz, Sally Brown in You’re a Good Man, JoJo in Seussical the Musical and Brigitta in the Sound of Music. She began her career in performing the musicals as well sometime after. Then, she turned her attention towards TV and the movies. She has been appeared in the commercials for Nestle Waters, Regions Bank, Blue Cross/ Blue Shield, Trident Layers Gum and Amica Insurance.

She has released her album “Brave Souls” in 2014. She has got chance to be in the crew of the popular TV series “Dolphin Tale” where she played the role of Hazel Haskett. Viewers love this character very much as she has done tremendous work to highlight this character. Because of her performance in this series, she has got good responses from the audiences as well as the critics. This also shows that she has the capacity to do a lot better in the future. She has also appeared in the “Winter: The Dolphin That Can” as the narrator in 2013. Currently, she is preparing for “Dolphin Tale 2” which will be on air in 2014.

In case of TV series and the singing career, she has appeared in the 1st Look in Dolphin Tale as an interviewee. She has also got chance to play in “Made in Hollywood”. In 2013, she sang the song “Just One of the Princes” for the “Sofia the First”. From 2013 to till today, she has been playing the role of Ocean in “Liv and Maddie” and Jordan in “Mighty Med”.

She has just reached the age of 16. Despite of her young age, she has already achieved tremendous successes in her life. She said that without her parents support, she will not be reached in this position. Her parents have always supported her in every step which leads to her career. She has also appeared in various TV shows and her songs are also very popular among the youngsters.

In an interview, both Nathan Gamble and Cozi have told that they would be returning to the sequel of “Dolphin Tale”. Many people believe that Nathan is her boyfriend and they have been dating each other. Though it is not officially responded, many people have seen them together in various occasions. She is a cute little girl and not that much tall with the height of 4 feet 9 inch. Dolphin Tale has made a great impact on her life and made her one of the young stars in Hollywood industry. She has the great potentiality and she is not the one to be missed.

She has also made her presence in twitter and Facebook. She is the regular user of it. So, you can follow her through it. To know more about her biography, you can visit wiki. Her interviews are also available in YouTube.