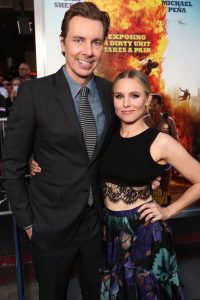 Multi- talented Dax Shepard was born in January 2, 1975 in Milford, Michigan, USA (age 39 years old). He is an American actor, comedian, writer and director. Dax’s mom worked for General Motors, and his dad, Dave Robert Shepard, was a car salesman. With both parents working in the automotive industry, his first love was cars.

He attended Walled Lake Central High School in 1993 and moved to California in 1995, before enrolling in The Groundlings School.  He later received a degree in anthropology at UCLA.  After eight years of auditioning, Dax booked Punk’d his first paid acting role.

In 2007, Shepard began dating actress Kristen Bell. Dax met Kristen at the birthday party of a mutual friend. Then, in February 1, 2010 this girlfriend and boyfriend got engaged. Dax Shepard says his fiancée Kristen Bell saved him from a life of drugs. This cute couple married on October 17, 2013 at the Los Angeles County Clerk’s office in Beverly Hills.

The gay rights advocates, who prolonged their engagement to three years until after the Supreme Court struck down the Defense of Marriage Act, wed at the Beverly Hills County Clerk’s Office in a simple ceremony on Oct. 17. On March 2013, this couple gave a birth to sweet lil princess Lincoln Bell. As of January 2012, both were vegan.  Both husband and wife were named Sexiest Vegetarian Celebrities of 2013 by PETA.

In 1998, Dax Shepard made his feature film debut in “Hairshirt”. This film was a low-budget romantic comedy that won several awards at the 2000 Slamdunk Film and Video Festival. His next feature role was in the independent and virtually unknown “Boyz-N-The-Burbs” in 1998. He did a series of smaller roles on television and in film. In 2002-2004, he appeared on “Life with Bonnie”, playing a young commercial director. From 1996-2009, Shepard provided his voice for “King of the Hill”. Also, meanwhile in 2003, he followed with a small role on the big screen in “Cheaper By the Dozen”.

He next appeared in the Nick Lachey music video “Shut Up. He had his first starring role in “Without a Paddle” in 2004. He signed “Zathura” in 2005 which led him a great height in his career. In 2006, he played a role of knuckleheaded lawyer in Mike Judge’s “Idiocracy”. . Shepard went on to appear in a small role in the Tina Fey-Amy Poehler comedy, “Baby Mama” in 2008.

He was also in the 2010 movie When in Rome with future wife Kristen Bell. Shepard has been part of the main cast of the NBC series parenthood where he played a role of Crosby Braverman. Nevertheless, he, produced, co-directed, and starred in the 2012 low-budget action comedy film, Hit and Run alongside Bell and his close friend Bradley Cooper. During his career he played in many TV series and acted on number of movies

Shepard races motorcycles at Buttonwillow Raceway, including his Ducati Hypermotard 1100S and Suzuki GSX-R1000. He donates much of his time to the Hollenbeck Youth Center, an after-school program that provides opportunity to at-risk inner-city youth. He has served as their official Master of Ceremonies, along with his friend Tom Arnold, for the Inner-City Games and Hollenbeck Youth Center’s Miracle on 1st Street Toy Giveaway Program in East Los Angeles.

Shepard’s biography, current affair, sexy and shirtless pictures etc. can be found in wiki, imdb etc. his fan can follow his blogs in twitter.