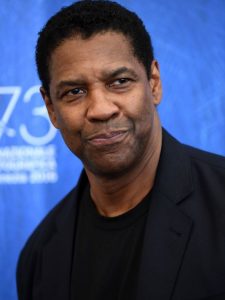 Known for his fiery anger driven tirades acting, Denzel Washington has already proved himself as one of the legends in the Hollywood industry. He is an American actor, film producer as well as film director. He was born in 28th of December, 1954. He has received many critical acclaims for his work in film.

He has been actively involved in this field from 1974 and his acting has always been unique to the viewers. He started from the theatre in 1976 when he performed in “Wings of the Morning”. In his early career, he was also filmed in the series of commercials in the Fruit of the Loom ensemble.

This created huge popularity of him and many gave the positive response for his acting style. Then, in 1989, he worked in another blockbuster movie “Glory” from which he was awarded Academy award, Golden Globe Award, NAACP Image Award and also got nominated in Chicago Film Association Award, National Society of Film Critics Award and New York Film Critics Circle Award.

In 1990s also, he made his presence in the industry from many successful movies. Some of them are The Pelican Brief, Crimson Tide, Philadelphia, Courage under Fire and He Got Game and The Game. From the movie “The Game”, he once again won the Golden Globe Award for Best Actor and nominated for many prestigious awards.

In 2001, he appeared in the movie “Training Day”. It is also one of the blockbuster movie from which he won Academy Award for Best Actor and many more. He played in the role of “Detective Alonzo Harris” in this movie. Some of the famous movies which he had played in 2000s are John Q, Antwone Fisher, Out of Time, Man on Fire, Inside Man, American Gangster, The Great Debaters, The Book of Eli and Unstoppable. These movies are one of the best movies of the decade as well. In 2012, he came up with the movie “Flight” where he portrayed the role of Captain William Whitaker.

This movie also captured the views of many viewers as well as critics. This movie also received many awards from the acting of Washington. Currently, he is preparing to launch in the new movie “The Equalizer” which will be released in 2014.

In his career, he appeared in the theatre also. After a long period of time, he returned to the theatre in 2010 and portrayed himself as Troy Maxson in the “Fences”. From this act, he won the Tony Award for Best Actor in a play. He has also appeared in many TV series as well.

Washington is 6 feet 1 inch tall.  He has reached the age of 59 from 2014. He got married in 1983 with Pauletta Pearson to whom he met on the screen work of “Wilma”. This couple has 4 children. He is a devout Christian and also considered to becoming a preacher. So, there has never been anything about him and his girlfriend, affair and dating. Since, both husband and wife are happy with each other; there is no question of divorce between them. They are living happily in the house in Beverly Hills.

He has achieved the height of success and has the net worth of $190 million. He is also present in twitter as well as other social media. He is the one who has won two Oscars. He is a loving father as well as husband.

He loves his kids very much. That’s why, he has maintained his time in between work and family. He also starred in the Broadway revival of Lorraine Hansberry’s classic. For more information about his biography, you can visit Wikipedia.