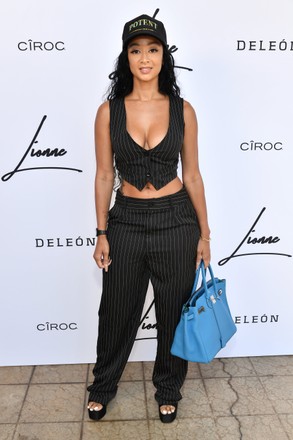 Draya Michele, an actress and a model who is best known being a star of Basketball wives  LA on VH1 and her relationship with superstar Chris brown as well as her alleged child accusation to put him in danger; was arrested and freed on $25,000 bail.  It is rumored that Gilbert Areas is her son’s father and Yes! She is a mother with a son named Kniko whose father’s identity she cautiously hides from displaying in public.

Draya Michele was born on Jan 23, 1985, her real name was Aadraya M. Howard. She is an Aquarius by birth. Currently, she lives in Los Angeles, California. She has an Italian mother named Valeria Diaz – Cruz who lives in Reading, Pennsylvania, USA. At 29 years of age, Draya has an ethnicity mixed as she belongs to black and white ethnic groups of African American and Italian, and definitely, she has an American nationality. Her mom was the biggest fan ever of Teena Marie and Draya grew up listening to her and she knows every word to all her songs, which she revealed in US weekly. She believes in psychics and she has a phobia of electrical sockets as she once got shocked by them. She loves cooking dinner but despises cooking breakfast. She tried to be a vegetarian and failed miserably. She loves Spanish foods. She went to school to be an aesthetician since she was always fascinated with skin. When she was younger, she wanted to be Posh Spice, and now that she has grown up, she wants to be Victoria Beckham.

She has now acted in numerous music videos and shows off her presence in the music industry as a model. On television, Basketball wives LA is one of the parts of its reality show on VH1 in which Draya Michele is linked somehow with a basketball player in her life, and he is NFL star Orlando Scandrick. The drama seemed actually to get real and recently in April 2014, there were rumors that she is quitting the show, but it all seems false as a source says she will be back for the next season. About Basketball wives LA, you can also visit her Wikipedia.

She is not only into Basketball wives LA, but also in other business ventures such as clothing, swimsuits, and club appearances besides modeling to just look pretty. She has huge fan followers on her instagram.com/sodraya# numbered 2,096,366 followers up to now on May 2014. She has put her pictures on Instagram which are very attractive and alluringly sexy.

In King’s magazine, she revealed her height being 5 feet 6 inches tall, her weight of 125 pounds, and body measurements being 34D – 25 – 36 inches. She uses Twitter to connect with the world as:

In which you can follow up as well.  As her wiki feet go, she has beautiful feet and wears a shoe size of 5.5 US. You can search her other wiki, biography and net worth on the internet. Her net worth is estimated to be $ 4 million

was born in . is Model, Actress by profession, find out mroe facts, education, weight, and more.