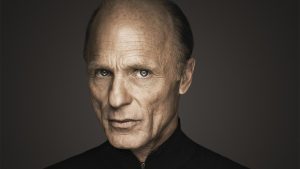 Very successful actor, screen writer and director Edward Allen Harris was born on November 28, 1950 in Englewood, New Jersey, USA.  He has already crossed sixty’s and his age is around sixty three. He stands tall with his great height of five feet nine inch. Looking towards his family background he was born and raised in middle class family.

He was blessed to Margaret and Robert Lee Harris. He is also blessed with younger brother Spencer and older brother Robert. His family was originally from Oklahoma and later shifted to New Mexico. Talented Harris went to Tenafly High School and graduated with flying colors in year 1969. He was also involved in sports and became team captain in football team.

A guy with athletic personality was athlete in his high school days. May be Columbia University was glad to recruit him and he competed in athletics in 1969. While he was in New Mexico he has an intuition and discovered his passion in acting and drama. He learned drama at the University of Oklahoma. His performance in drama and acting was highly appreciable by audiences.

In order to enroll himself in more depth he joined California Institute of the Arts for two years and holds BFA degree. It has already become a decade since he is working for entertainment industry and his contribution to American industry is amazing. He is the person who dare to dream and lived the life he has always dreamed about. His hard work, passion to become successful, and dedication towards his work are the reason behind his success and achievements.

Today he has name, fame, power, money and millions of admirer who loves him for his awesome job. He is best known for his roles in films like The Rock (1996), The Abyss (1989), A Beautiful Mind (2001), and Gravity (2013). In his acting career he has been nominated by Oscar about four times and he has 22 wins and 34 nominations.

There is no doubt he is amazing actor but he is recognized as a serious person in a set and he accept it with full dignity saying he don’t like bullshitn so it is better to be serious. His debut role was seen in TV series named Gibbsville  episode Trapped and his role was Steve.

After that his journey in television continued with many movies and TV series. He is successful in entertainment industry since 1976 till today. One of his best film is Apollo 13 released on 1995 where he played role of Gene Kranz. His role was highly appreciated and he won many reputed awards and also nominated by Academy Awards, Chicago and Golden Globe awards.

His upcoming movie is Frontera (2014) where he is playing role of Roy. Moving on towards his personal life biography, he married on November 21, 1983. His wife Amy Madigan.is also an actress and they are having good time together and has no chance of getting divorce. The couple has child named Lily Dolores Harris (daughter) who was born in 1993. He and his wife both love children and have great time with their daughter.

He has established his unique position in media industry with lots of rewards and achievements. He is richest celebrity with net worth of $30 million. He was energetic not only when he was young and even after he is dead he will remain in our memories. He is active on Twitter and wiki.