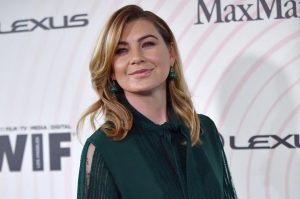 Born and raised in Roman Catholic, the daughter of Kathleen B and Joseph E. Pompeo, a salesman, Ellen’s ethnicity comprises Italian, English, and Irish descent.  She was able to gain a wide range of popularity from the tv shows as she plays as Dr. Meredith Grey on “Grey’s Anatomy” including Patrick Dempsey as her partner in the drama.

As a result, her contribution leads her to earn the nomination in the Golden Globe Award for the Best Actress – Television Series Drama. Ellen has made a significant presence in several movies such as ‘Moonlight Mile’, ‘Old School’, and ‘Daredevil’. Grey’s Anatomy is the long-running hit ABC medical drama series that initially started in 2005 to the present and this tv show has been widely accepted by the audience.

Celebrating its 200th episode of Grey’s Anatomy, Ellen has been able to accumulate an estimated net worth of 30 million dollars from her overall professional earnings.

At the age of four, her mother died due to the excessive use of painkiller and her stepmother raised her. Altogether, she has five siblings in the family among the three of them are sisters and two brothers.

Ellen pursed to make her acting career when she decided to move to New York City, at first she appeared in commercials and small independent movies which was of course a bold initiation. After the hash entry into the industry, she finally got a chance to make her debut in the television drama, ‘Law and Order’.

Following their success in the TV drama, she got appear in her debut movie as well and she was featured in ‘Coming Soon. Although in the movie, she had to play only a small part it was a golden opportunity for her to expose her talent and skills.

The success of the movie made a turning point in her life and she never thought of looking back on her past deeds. Ellen was also honored from the National Italian American Foundation for her contribution in the entertainment in Washington, D.C. and she has also won Satellite award. She exposed herself as a media darling making interviews with hosts on different talk shows that gained momentum to win the People’s Choice Award for Favorite TV Drama Actress.

Now moving on to her physical orientation, she also has severed in many commercial industries as a model with an average height of 5 feet and 7 inches tall; in addition, she has also got skills to expose her sexy body, which is like of fit banana shaped body.

Moreover, her weight is around 57 kg which is considered to be the most appropriate weight for her to boost her sexy athletic looks. 44 years old,  Pompeo still manages to look fabulous and attractive, while some of the observers and wish wishers speculate about her fuller cheeks is because plastic surgery. However, it has not been disclosed in the media about her plastic surgery.

Pompeo was really much attracted towards music producer Chris Ivery, the couple seem to be dating for long time. Finally, they married on November 9, 2007. In an interview with AP reports her husband announced that Ellen was pregnant with her first baby. Now, she is the mother of two children and both of them are daughters, Stella Luna and Sienna May.