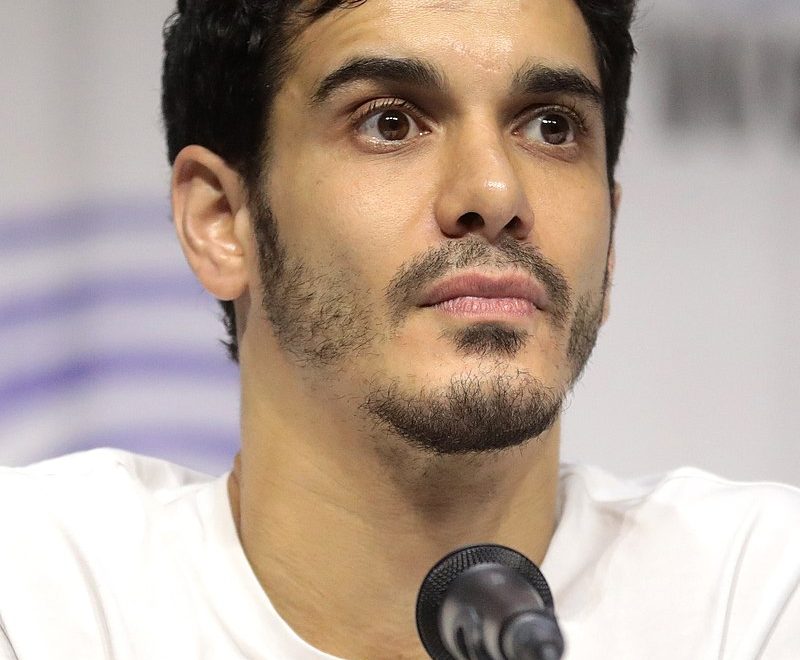 I have a very mixed race background so, although I’m not Asian, I’ve got distant touches of Indian in me. That’s quite an interesting point – you will be more likely to take on Asian roles because that’s the demographic here.”

–Elyes Gabel answered the question –  “ Do you feel responsible for representing Asian characters like Guppy on screen?”,  asked a journalist of theaerogram.com.

Born on 8 May 1983 in London, England, Multitalented British actor Elyes Gabel is best known for his diverse roles in critically acclaimed, award winning and internationally popular television ensemble series such as “Game of Thrones”, “Casualty”, and “Waterloo Road”.

More precisely, his most popular television characters are “Dothraki  Rakharo” – Khal assigned bodyguard of “Daenerys Targaryen”, who later becomes one of the most loyal bloodriders of the “Khaleesi” after the death of his supreme “Khal Drago”  in Seasons 1 (2011) and 2 (2013) of the HBO’s noble houses power-fight based fantasy series “Game of Thrones”, “Gurpreet Sandhu”- girls-darling but career loving doctor in the BBC’s emergency medical drama “Casualty” (2004 to 2007), charming and hunky professional athlete turned PE teacher  “Rob Cleaver” in school drama “Waterloo Road”, and computer brainiac Walter O’Brien of CBS’s computer feud Scorpian (2014). Nevertheless, he is also known for acting in movies namely World War Z (2013), Interstellar (2014), and his upcoming movie  A Most Violent year is one of the anticipated movies of 2014.

Another wiki on his professional life can be accessed via Wikipedia’s biography on her.

A 31-year-old actor is a hunky man who possesses both good looks and tall height (6 feet). Besides acting, he is into making music. In fact, in the year 2007, he left the medical drama Casualty to make something out of his music and guitar stuff with his band. Back then, Johnny Smash fan Elyes entitled the band’s work calling it “funky folk”.

Anyway, his music career may not have turned out as he thought, but he sure has earned a valuable reputation internationally as an actor because of his acting talents. Still, if his fans want to get some taste of his music, they can youtube his May 2011’s bar jam video of the event Raptor Jam of Elyes’ ‘Pay Attention Lord’ that took place at The Mason’s Arms in London. The link to the video is given below:

Now, moving on to his personal life, he is dating his 30-year-old Scorpion co-star Katharine McPhee. The couple shared some romantic moments in August 2014 on the set of Scorpion the show. Their love story came into the limelight when a Scorpian set picture showing the gorgeous actress’s hand pressing Elyes’s buttocks at the same time kissing his neck- got out publicly. Officially, Katherina is still a married woman as her divorce request is still pending.

Anyways, Katherina’s husband Nick Cokas’s evidence-backed divorce paper hints Katherina cheating on him when they were still together. However, Katherina’s May 2014 divorce paper states that they separated on 15 March, 2013-which contradicts Nick’s. According to Nick, 47, they separated in May 2014, which supports his case that claims that they were still married when the kissing picture of his wife/ Smash actress Katherina and a married man namely Smash director Michael was pictured.

As of 2014, Elyes’s affair with Katherina has surely been the talk of the town now and then. Despite the scandal, Micheal Morris, 56, is still married to his wife of ten years namely Mary McCormack, with whom he has three children.

Consequently, the ending of 7 years of marriage between Nick and Catherina has opened the door for Elyes and Katherina to continue their romance as a loving boyfriend and girlfriend. On the other hand, if the court gives a decision in favor of Nick, it will be proved that Katherina has cheated on him, and thus, she may have to pay heavy money to him.

Furthermore, no other rumors including gay rumors on him are present in the media. Also, one would like to view the sports-loving fit guy Elyes’s shirtless pictures online. It is a known fact that he is into football and tennis. Plus, he likes to keep his body fit-which he does through regular sets of workouts.

Moreover, his net worth is not known but it is expected to be around 5 million US dollars. Regarding his nationality, he is British as he was born in London. Plus, he may not be Indian by ethnicity, but his family sure has some Indian roots.

Truly, it’s been near to 15 years that the talented actor has been acting. But, he doesn’t have large social networking followers, but he is expected to gain popularity in the future. His fans can connect with him via his Twitter and Instagram profile. His fans want to see more of his film acting when he is giving such great TV show performances. And, they are right. The talented actor sure has got potential.