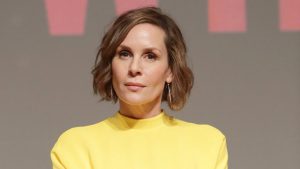 An American actress, Embeth Davidtz (birth name Embeth Jean Davidtz) was born in 11th August, 1965 in the city of Latayette, Indiana, U.S. From her early age, she was attracted towards arts and she had been staying most of her childhood age in South Africa. After the release of the movie ‘Matilda’, her career as an actress in the Hollywood industry took her to next level.

She was widely recognized for her marvelous role as Miss Honey in the movie ‘Matida’ that portrayed herself in a character Jennifer Honey. During her career, her contribution of outstanding memories in the movies such as ‘Mansfield Park’, ‘Bicentennial Man’, and ‘Fracture’ remains in the history of Hollywood industry as a successful movies. Likewise, she has also played in TV shows such as ‘Mad Men’ and many more.

Davidtz was always attracted towards acting and drama from her early childhood age. Her vision was clear and distinct, although, it didn’t match with her academic qualification; she persisted on perceiving her aim to become successful actress.  At the age of 21, she made her debut professional acting portraying in the character of Juliet in the stage production of ‘Romeo and Juliet’ in Cape Town at the Maynardville Open-Air Theatre.

During her performance, she had to perform two different languages such as English and Afrikaans. Since, her ancestry is recognized as Dutch, English, and French, she is also known as Bilingual actress because of her ability to speak and know various languages. Her local plays and dramas came for nomination for prestigious African award. Her bigger picture and influence is still in South Africa, she has played numerous short telemovies including A Private Life where she starred as daughter of an interracial family.

Her entry in the Hollywood industry was not as convenient as she thought; she had to do lots of struggle in order to get quick move into the industry. She went to London to grab agent to settle for Los Angeles. After all, when she moved from London to Los Angeles she made her debut American film ‘Army of Darkness’ which is Evil Dead sequel. After its accomplishment, she then made her presence in many television movies and short film as well. In 2007, she displayed her role as an unfaithful and unfortunate wife in the drama Fracture as Anthony Hopkins. During the period between 2009 to 2012, she played in couple of television series including ‘Mad Men’. Her appearance as Peter Parker’s mother Mary in the movie ‘The Amazing Spiderman’ was one of the short role she made during her career.

Talking about her personal life and affair, she has exposed her information to the media without any fear of being negative speculation. During her life, she never had to regret about her past life, although, she had long relationship with actors Ben Chaplin and Harvey Keitel but it didn’t last long. Now, she is married to Jason Sloane who is an entertainment attorney. She is already a mother of two children.

Decade long career in the film industry, Davidtz has done interview with many hosts of the media critics. 5 feet and 8 inches tall in height, Davidtz has an average weight and she is no more seems to be heaviness in compare with other actress.