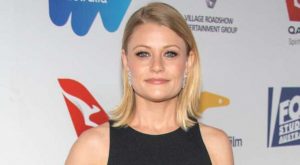 Belle of Once Upon A Time, Emilie De Ravin is dating Eric Blitich since this 2014. Eric Blitich tweet name goes by “@SonofaBlitich”.  Moreover, his twitter description states that he is a screenwriter and director. He resides in Los Angeles.

Surely, the un-known screenwriter and director has won the heart of the multitalented TV shows actress. That’s why; she has been visiting places, making future plans and spending most of the weekends with Eric.

Previously, the Australian actress was married to actor Josh Janowich. Their divorce court papers clearly state that they married on June 19, 2003, had their wedding ceremony on June 26, 2006, and finally separated on November 1, 2013.

It seems like they improvise their dating life to the next level by going through a court marriage procedure on June 19, 2003. However, the busy on-screen personas officially married on June 26, 2006 holding what we can call a few-people invited wedding. It is reported that the couple started dating each other since 2002 after their couple of meetings in Australia went right. And, when the charming actor proposed the pretty actress on 2005’s New Year Day in Melbourne, it was only a formality for her to say yes.

Unfortunately, their relationship wasn’t really very impromptu and sweet as time passed by, and the relationship began to crumble. Both of them started to realize that their decision to get married at this early stage of life and career was counterproductive to both of them. Both of them were only 25 when they got married in 2006.

Because things weren’t looking much brighter, wife Emilie filed for divorce in 2007. People got surprised by this move of her as it’s had only been just six months since they got married. However, the actor was only served the divorce papers in 2009.

Again, 2009 could not be the year separating the couple. It is said that the grand Japan trip that they took as a couple in the year 2009 stopped their separation. Because of all these past situations, their fans back then were developing a habit of making fun out of their divorce news as it was ongoing since forever.

Ultimately, the couple got separated on November 1, 2013. However, both of the stars filed and got a solid divorce in July of 2014. Nevertheless, there was also a twitter aroused rumor few years ago that projects the actor Jeremy Davies was her loving boyfriend in 2010.

Moreover, there is also a rumor that projects something was going on between dashing Robert Pattinson and Emilie in 2009. It is said that the stars came close to each other during the production of the movie Remember Me. At that time, Robert relationship with his girlfriend Kristen Stewart was crumbling, and Emilie relationship with husband Josh was near to end.  It is said that Emilie, back then, wanted Robert to propose her. But, when Robert decided to patch up with Kristen, Emilie was heartbroken. Anyway, it is also said that Robert and Emilie so called love didn’t worked out because Emilie’s husband Josh was trying very hard to get her back.

Now moving on to her body measurements, she is not a tall woman with the height of 5 feet and 2 inches. But, she has got he hot r hourglass shaped body, toned thighs and breast, well-maintained skin, blonde tuned beautifully colored hair, strong Australian accent and cute yet sexy looks boosting her physical sex appeal.  Her body measurements are believed to be 36-27-37 inches and weight to be around 136 lbs.

Yes, it is a true story that she gained weight in 2012. It is so because she had to play Belle, a daughter of a wealthy merchant extracted from a fairy tale. Before Once Upon a Time, she was intensely involved in American television drama Lost as Claire Littleton, a girl who has to survive in an unknown island with little resources after the plane crash. Anyway, those pregnant rumors that came into limelight back in 2012 are surely hoaxes.

Last but not the least, expressive and outgoing in nature Emilie was interested in ballet and even sports in her childhood. Later, after joining reputed institutions like National Institute of Dramatic art and Los Angeles located Prime Time Actors Studio, she finally understood acting fire burning inside her.

Her fans can connect her via social networking sites like Twitter, Facebook and Instagram. To get more info about her professional life, one can always go to Wikipedia, and IMDb biography on her. To watch her interviews, YouTube would be a better platform.

Interesting wiki- She has also appeared in promising movies such as Public Enimies, Remember Me, The Chameleon, and Love and Other Troubles.