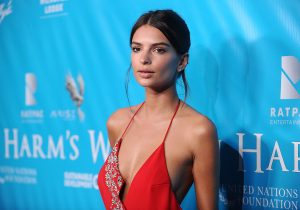 Emily Ratajkowski is a British born American actress and model. He birth name was Emily O’Hara Ratajkowski. She was born in June 7, 1991 in Westminster, London. Her popularity increased after she was appeared in the music video “Blurred Lines” of Robin Thicke. It has become the number 1 song of the year 2013.

She has been actively involved in this field from 2004. Her father was of Polish and Irish descent whereas her mother was Irish and German descent. In her young age, she got opportunity to travel many parts of Europe. she grew up without the influence of television. Before she started modeling, she tried her hand in acting, ballet as well as in soccer as a youth. Because of her background, Emily was quite comfortable with the naked body.

She appreciates photography as well as its arts. She has also been exposed to her nudity as her father was a visual artist. She said that she has seen her mother topless on the beach every summer in Majorca. So, she was also drawn towards the levels of modeling by the influence of her parents.

Firstly, she appeared in some of the movies in the non discriptive roles. She also got chance to appear in the TV series “iCarly” in the role of Gibby’s girlfriend, Tasha. From many ups and down, she achieved the success of fulfilling her dream.

At the age of 14, she was signed to the Ford Models. After the completion of University studies, she pursued her career as a full time job. She has also done some swimwear shoots. But she became popular and recognized as a fashion model after she shouted several campaugns and editorials with the photographer Tony Duran. In 2012, she got wonderful opportunity to work with Jonathan Leder which was her dream come true moment.

In 2014, she appeared in 2 videos for the company “Fredrick’s to Hollywood”. This is the company where she has worked previously as well before becoming successful. These videos went so viral that these videos became the most popular video on the company’s YouTube channel.

She has also appeared many times in music videos. In 2013, she got chance to appear in the song “Fast Car. In the music videos in which she has appeared, those songs have become one of the successful videos. She has just reached the age of 23. But the successes she has achieved as tremendous in compare to her age. She has an excellent body measurement of 34-24-33. She has an hourglass body shape.

She is tall and beautiful with the height of 5 feet 7 inch and she weighs 52 kg. She is very popular because of her hot and sexy body as well as the legs. She had been dating with creative director and menswear buyer, Andrew Dryden. They split up in 2014. She was fed up with different kinds of rumors such as dating, affair as well as whether she had got the breast surgery or not. Whoever her boyfriend is, she has not yet revealed him to the media. She is in no mood to get married soon.

She thinks that to have a better relationship, both husband and wife should first of all know each other very much. She has also commented that she loves the children and utilizes free time by reading the novels. Her upcoming projects are Gone Gir and her photo shoot for the GQ magazine is the one you should not miss. She has the net worth of $2 million.

To get more information about her biography, you can visit wiki. Her sexy bikini pictures as well as her nude pictures are also available in the web. You can also follow her in Facebook, twitter as well as in Instagram.