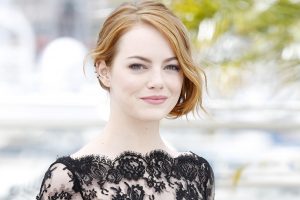 Currently, progressing like a wildfire in American acting industry, Actress/Model Emma Stone, made her way into Hollywood from the hit comedy movie “Superbad” in 2007. She was just 17 years then. Now, when she is 25 years old, her inspiring career shines so brightly with her popular roles in  the movie like Friends with benefits, The Amazing Spiderman 1  and 2 , Gangstar squad, Easy A, (Crazy, stupid, Love) and many more. Her upcoming movies like Magic in the moonlight and Birdman have received good fan and critic’s response.

Along with, her career, another aspect of her that has raised her popularity is her hair. As we know, her natural hair color is blonde. But, we know that she won her first role as a teenager after dying her hair from blonde to dark brown to red in SuperBad. But again, for Amazing Spider-man 2: Rise of Electro, she changed her hair color to blonde.

Ok, at first, analyzing her looks on different hair color, we will agree in the fact that, out of the three hair colors she had, she looked more charming and sweet when she had red hair.

Secondly, talking about her hair, everybody knows she is also known for her different hairstyles. But, out of her different hair styles, her signature hairstyle is up-do and side swept bangs which gives her an elegant look if combined with red hue color. Moreover, the hairstyle comes better on her because of her bright porcelain skin and soft lips. Plus, when she add pink color to her lips and dark shades to her eyes combined with her trademark red hue hair, she looks like a princess.

Style-savvy, Emma knows how to wear according to the occasions. Just, you name it, and you will get different looks of her perfectly matching with dress she wears. Some famous looks she has had in popular occasion are disco inspired, gothic, romantic and feminine.

25 years old of age, young actress, Emma, before coming to mainstream movies industry, was acting in television industry from 2004. Anyway, in her 10 years of acting career now, her net worth is speculated to be near $9 million now.

But what is not fake is her relationship with “The amazing Spider-man actor” Andrew Garfield. They started dating since mid-2011 when they shot the first spider-man film. Now it is said that the dating couple is seriously discussing about marriage and all other stuffs. Anyway, both are busy with their career. Just to let you know both are progressing young actors and spider-man co-actors. Emma is in her mid-20’s and Andrew is in his early 30’s plus both are in increasing height of their career.