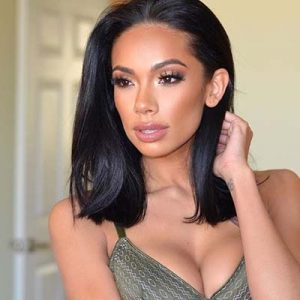 Erica Mena is a devoted Mother, Model, Actress, Singer, Tv Personality, Avid Traveler and Aspiring Designer. Her birthday is on November 8, 1987. Her nationality is American. She was raised in Bronx, New York. Having both Puerto Rican and Dominican ethnicity, this amazing lady has enough personality to take over the industry. Erica was always interested in performing art classes and her ambition was unparalleled with her drive.

This feisty Latina model reached 27 years in her age. Erica is popular among people for Love and Hip Hop (2010), Kourtney and Kim Take Miami (2009) and VH1 News Presents: Hip Hop Videos-sexploitation on the set (2001). Erica always had a passion for fashion. She started sketching dresses since she was eight years old and later on started working with Randa Quaraan of Socially loud and created “HER” by Erica Mena, a clothing line. We can also see her wearing her own official 2015 spring/summer collection line on season 5 of Love and HIp Hop.

It didn’t take long for Erica to create her own name in the modeling world after winning a Jennifer Lopez look-alike contest at the young age of 14. After winning this contest sponsored by MTV, she did number of roles in hip hop music videos including Chris Brown’s “Yo (Excuse Me Miss)” and Fabolous’ “Breathe”. She can also be seen in music videos of famous artists like Akon, Fat Joe to name few. She has also been the cover girl of numerous magazines including XXL, KING, The Source, SHOW, Maxim and Smooth.

Erica has also secured her several print campaigns such as Roca Wear, Tommy HillFiger and Loreal. She has also teamed up with Rich Dollaz to create out a new music.  Erica has also written a biography called “Underneath It All” and other books. “Underneath It All”  was released on April 2013, where she shares some of her deep, dark family secrets, writing her mother was a “real hustler” and her father was “in the drug game”, who was “very cheap” and he made her mother “struggle more than she had to….”.

This book also gives a unique glimpse of her childhood and her life so far. But, it doesnt includes any information about other persons she met in her professional life.  Erica’s height is 5 feet 7 inches and has a hot figure measuring 34-24-39 .She has long and amazing feet. Her bold sexy waist is the thing that many people fall for. Her fans can also find out her bra size, shoe size, and other measurements via google. Erica has a son named “King”, from her husband Raul Conde, an affiliate of rapper Fat Joe who has directed several videos and is buddies with Scott Disick, Kourtney Kardashian’s baby daddy.

But they broke up already and are not co-parenting King. She said “I’m a single mom and I have full custody of my son,” as per EURweb reports and told that “His father doesn’t even take care of him. I’m his full provider, hence why I’m always working.” But, according to the website Diary of a Hollywood Street King, Mena doesn’t, in fact, care for King but rather leaves little man in the care of a “gay neighbor”.  Erica had also affair with married personality DJ Envy.

She allegedly meet him through Lady L (Murder Miami’s) . She was dating him for three years but was unknown about his married life. They used to go on all kinds of trips and Envy used to pay for all. Erica and Envy seemed to be perfect happy couple before she found out that he was married. Erica’s sister Googled Envy to find out some information about him and found out that he was married and let Erica know ASAP. Erica was shocked to know about her three years old boyfriend lying to her and stopped dating him from that point.

Currently, she is in relationship with model Cyn Santana and she told to the media that she will soon inform this relationship to her son, King. Recently, she has also an Instragram account and photos of herself with a “mystery woman”.