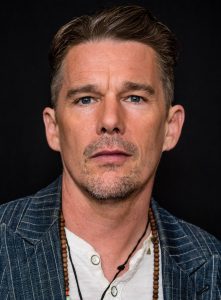 An American, Actor, writer, novelist, screenwriter, and director, Ethan Green Hawke was born on November 6, 1970, in Austin, Texas, U.S. He is kind of Sensitive Man with good looks; also his multidimensional talents consist of strong intellectual made him emerged as the talented celebrity in the 1990s.

He has received several awards among them the most prestigious award was Tony Award nomination for his contribution in his theater work and also both as an actor and writer he has been nominated for the Academy Awards.

He made his presence in several movies which often made breakthrough in the box office such as ‘White Fang’, ‘A Midnight Clear’, ‘Generation X drama’, ‘Reality Bites’, for which he received critical praise, and other romantic sequels dramas like ‘Before Midnight’ was his latest drama melody released in 2013. He not only starred in the movies but also made theater productions that include ‘The Seagull’, ‘Henry IV’, ‘Hurlyburly’, ‘The Cherry Orchard’, ‘The Winter’s Tale’ and ‘The Coast of Utopia’, made the results remarkable that earned him Tony Award nomination for ‘Best Featured Actor’.

Recently, he is busy involving in his new movie ‘Boyhood’ which is a movie that is likely to be release in 2014 summer. It has been shot over the course of 12 years where he is playing a role of protagonist’s father.

He was born and raised by his mother in Austin, Texas. But things changed gradually after his mother remarried and the family moved to West Windsor Township, New Jersey at the age of 10 where he joined ‘West Windsor-Plainsboro High School South’.

Later on he got transfer to the ‘Hun School of Princeton’ which was secondary boarding school from where he did graduation in the year 1988. Hawke began to follow his dreams and began to persuade in acting career and he joined ‘Princeton’s McCarter Theatre’. At the age of 14, he made his debut in ‘Explorers’, the science fiction that is based on the fantasy flick, although it didn’t make any impact upon its theatrical release, he never gave up in this sector because of his persistence its theatrical show made it to next level.

Likewise, during his high school, he aspired to be a writer and gradually he shifted and develops his interest in acting. People began to recognize his talents and skills, when he starred a role of detective from the Los Angeles Police Department in the movie ‘Training Day’ which made box office hit with net worth of $ 104 million Worldwide.

Besides from acting, Hawke is also a music director, under his supervision and guidance made the music video for the 1994 song “Stay (I Missed You)” by singer-songwriter Lisa Loeb.

He has also passion for writing and he was successful in becoming a writer when he published his first novel in 1996 called ‘The Hottest State’ which was based on the love affair between a young actor and a singer.

He began to engage in many other professional sectors like he was a co-founder and the artistic director of Malaparte which is situated in New York called Manhattan Theater Company. He successfully became a producer as well when he made his appearance in a 1995 production of Sam Sheppard’s Buried Child.

In the year 1998, Hawke married actress Uma Thurman, they have two children in the family: daughter Maya and son Levon. After five years of relationship, the couple made decision to be separated and the case was settle the following year when the divorce was finalized in August 2005.

Since then there was a rumor around in the media that he had an affair with Julie Delpy. After couple of years, he again married for second time wedding Ryan Hawke. His wife is a graduate student from Columbia University and they have two daughters: Clementine Jane and Indiana. Since, there has not been any issue regarding gay faced by him and surrounded by the media in such a useless topic.

With height of 5 feet 11 inches tall, he considers to be the most influential celebrity in the media. With his multi-dimensional talents and skills to implement those talents is the credibility that made him icon in the industry.