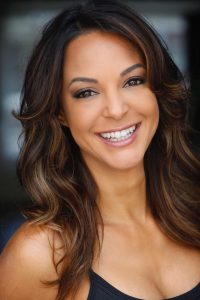 Eva Maria Larue was born in December 27, 1966 in Long Beach, California. She is a popular American actress as well as a model. She is best known for her role in “All My Children” as Dr. Maria Santos. She has also played in many movies as well as the TV shows which have made her even more popular in between the audience. She has been actively involved in this field from 1987 and she is still working passionately in it.

Though her parents were not from this field, they always supported her to pursue her career in this field. She became the teenage beauty queen in her early age. She has also won the Miss California Empire Title in 1984. This also made her easy to enter n this sector. After her success, she started her modeling career. But she has always interested in acting. So, she made her debut in the movies in 1987 from “The Barbarians” where she played the role of Kara. Till now, she has worked in more than 40 movies. In her career, she has played in both TV shows and the movies. But her real successes are measured from the TV series rather than that of movies. Some of her successful movies which have emphasized her to become even more popular are “Ice”, “Robocop 3”, “Lakeview Terrace” and “Help for the Holidays”.

In case of her acting in the TV series, she made her first appearance from “Santa Barbara” in 1988. In this series, she played the role of Margot Collins and her acting was also well appreciated by the audience as well as the critics. After her role in this series, she got many small roles from various TV shows until 1993. In 1993, she got an offer to play in the popular drama series “All My Children”. In this series, she played the role of Dr. Maria Santos Grey. She has also got chance to work in “Soul Food” and “Third Watch” which were very popular programs at that time. She got an opportunity to be the part of “CSI: Miami” in 2005. She played the role of Natalie Boa Vista from 2005 to 2012. Because of her unique acting abilities, she gave an impact to many audiences. Lately, she has appeared in “Criminal Minds” as Agent Tanya Mays”.

She has a tall figure with the height of 5 feet 7 inch. She has the weight of 54 kg. Though she has already reached the age of 48, she has maintained her body properly. Because of this reason, besides her acting, she is even more popular from her sexy legs and the hot body. In case of marriage,. She is married thrice and in all cases, it was ended with divorce. She got married for the first time in 1992 with John O’Hurley. But they got divorced in 199. After that, John Callahan became her husband in 1996. This couple has got 1 child, a daughter. But their relation also ended with divorce in 2005. In 2010, she got married for the third time with Joe Cappuccio. They have lately got divorce.

Though her personal life has got troubles, her professional life has always been the fantastic. She loves her sister very much. She has done plastic surgery to look even younger and gorgeous. Her hot bikini pictures are still viral in the web. She has the net worth of $56 million. Even in this age, she has maintained her body measurements properly. If you are also her fan, you can follow her in twitter, Facebook and Instagram. Her full biography is also available in Wikipedia and IMDB.