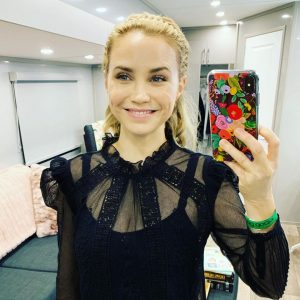 “I actually got started in acting when I was in pre-school. I was really into dance and performing, so my mom had me in dance classes, and then I got involved in a local theater company.” – Fiona Gubelmann

Born on March, 30, 1980, California native ever-smiling Fiona Gubelmann is best known in U.S.A as a television actress and animal lover. She has been in the acting industry for more than 10 years now, mostly specializing in comedy acting projects as she prefers purposeful and ambitious comedy projects to drama. Moreover, counting her recent 2014’s movie Last Stop, she has worked in total of eight movies till now. Undoubtedly, she is a selective actress when it comes to choosing roles and for this reason, she has favored comedy weather that is her television or movie projects in her long acting career.

Queen of sweet voice, Fiona Gubelmann in her pursuit of happiness in the industry, tried different acting projects since debuting as a valley girl in an episode of American flop sitcom called The Mullets in 2003, where two brother have similar mullet hairstyle but are different as a personality. During the course of 2003 to 2014, she generally starred in number of single episode roles but finally found her sole purpose of life in 2011 in unnatural and dark comedy American television series Wilfried, where Fiona as real life woman Jenna Mueller,  a dog owner whose dog comes to life for her neighbor, explores her own emotional journey of life besides the main storyline of the show. Moreover, she has been an important part of Wilfred since its first season in 2011 and now it is one of the top rated shows of the FX network.

Briefly stating her acting career, she is best known for her roles in the movies such as Employee of the Month, Downstream, Blades of Glory and Sex Tax: Based on a True Story and television series Wilfred. Nevertheless, her past single episode roles in television series such as CSI: NY, My Name is Earl, Parenthood, Downstream and many more are still remembered by the corresponding fans of these shows. In addition to her official film career, she is a popular YouTube persona with the hit short YouTube short movies such as comedy focusing on miscommunication between two lovers I Love You and satire short video about advertising a law proposition which allows people to give their food leftovers to needy people in Prop 43. These videos are amazingly popular and they have views in big 8 digits.

Picture perfect beauty Fiona has been participating in arts especially in acting and dancing since her childhood days. Because of this, she has never had stage fear. Her first acting project was a play i.e. a ballet version of The Cabbage Patch Kids at the age of four.  Fast forwarding to her high school days, she was indeed a bright student who excelled both academically and acting wise, acting in local community theater and showing her acting talents in various plays of her Torrey Pines High School as a reputable member of the drama department. Upon completing her high school studies, she enrolls in University of California as a medical student and later switches her major to acting.

Ex-premedical major Fiona switched majors to acting from medical line because as we can see, she was interested in acting since her childhood and while at the university, all of the technical medical lectures, one can say boring as compared to her acting works, reminded her more and more of sweet memories of frequent drama camps and plays she had in her teenage days. She graduated from UCLA with high grades in 2002 and after that, she joined one of the oldest acting schools in California called Beverly Hills Playhouse to continue her further acting study. After joining the institution, she frequently performed with its reputed theatre company called Katseal Theater Company.

Now, moving on to her sex appeal, she has a high sex appeal because of her well maintained hourglass shaped body, picture-perfect face and wavy long blonde hair with charming smile, shapely legs and large breasts. Also, her down-to-earth and analytical personality makes her a real woman to admire and to listen to. Moreover, she knows how to look hot and not reveal too much of her assets. One can check out her hot bikini pictures and a kissing picture on bikini from the show Knight Rider and other hot pictures by going to the following site:

Seriously, if she had only more height to her current height of 5 feet and 7 inches, she could compete with any of the so called tall models of the world. Unfortunately, her exact body measurements are not given but it is surely equivalent to a well-maintained meaty hourglass shaped body. Curvy blonde hair, a perfect body with appealing assets, down-to-earth personality, magnetic smile and loads of acting talents are the words used best to describe her. What more would you want from an actress? No wonder she has an astonishing net worth of 2 million to 3 million US dollars given her less long term roles.

Last but not the least, one will not get short of fansites and picture sites devoted to the gorgeous actress in the internet as there are numerous sites virally spreading information about the actress there, which worship her like a shrine plus twitter would also be a great place to connect with her. Anyway, not even a single site about her affair rumors because she has none. She is happily married to her husband Alex and they have recently moved into their new house and they wouldn’t divorce anytime soon because they are a loving couple. Unlucky us, boys!