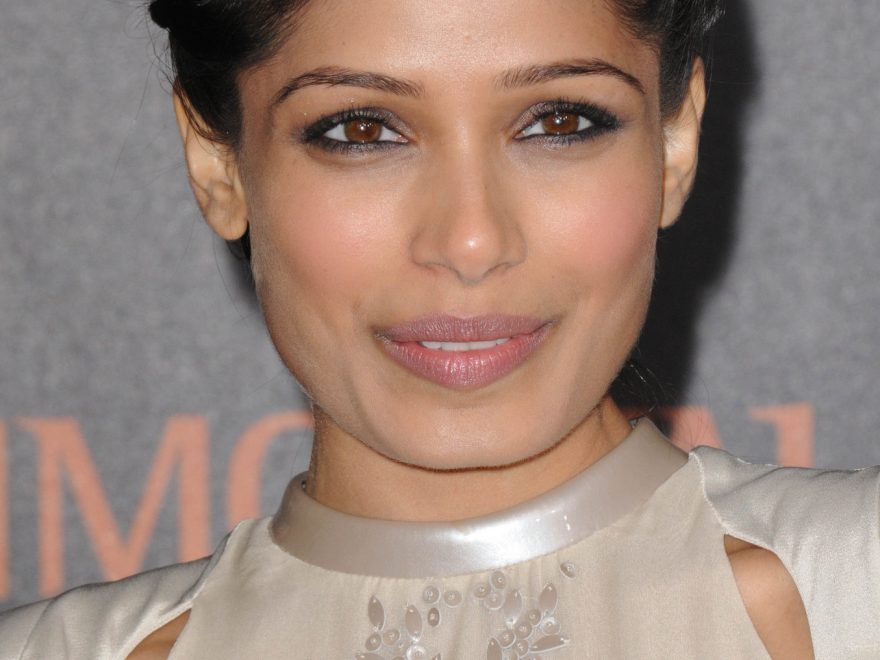 Freida Selena Pinto is an Indian model/ actress who was born on the 18th of October, 1984, and is currently 30 years of age.

She was born in a Mangalorean family as the younger of two daughters to mother Sylvia who worked as the principal of St. John’s High School and father Frederick Pinto was a branch manager at the Bank of Baroda.

She was born in Mumbai, the capital city of Maharashtra state and one of the metro cities in India. As a child, she was inspired into acting and model as she grew up around people like her sister who always inspired her towards it.

She studied at the St. Joseph School in Malad, where she was considered a very active child. Being a talented student in her class, she was also involved in other extra-curricular activities like singing as well as sports and was a very quick runner.

Upon graduating from there, she applied in many beauty contests and model hunts and also worked in theatres as a rookie actor. She graduated with a Bachelor’s in arts from St. Xavier’s College, Mumbai with her major being English Literature.

She also had Economics and Psychology as her minor. Pinto is a versatile performer with her talents ranging from singing and acting to a professional classical dancer too.

She also modeled for around 4 years with Elite Model Management and appeared in some national advertisements for companies like Wrigley’s Chewing Gum, Škoda, Vodafone India, Airtel, Visa, eBay, and DeBeers.

She also did some sensuous and hot photo shoots for fashion magazines like FNL and Femina and later took acting lessons at Barry John’s Acting Studio in Mumbai. She was born in a religious family and her parents followed Catholicism, and so does she. An Indian by nationality, she belongs to dark ethnicity as most south Asian people are.

A beautiful woman, Frieda is also equally beautiful from the inside. She considers herself to be a book lover and an open-minded person who is welcome to open talks on descent topics. Her sense of humor and jolly personality makes her very good company be around.

Similarly, she is also very helpful and her down-to-earth nature has helped make her so successful.

Never backing up from challenges, she has a competitive nature and is never scared of trying anything new or different.

She is also a very sexy lady and has got many revealing pictures on the internet where she has posed in bikinis and such. She has an average height of 167 cm, which makes her about 5 feet and 7 inches tall, with a body weight of around 52 kg which is very good for her.

She has a well-maintained figure and is believed to be health conscious as well as a regular exerciser. You can keep updated with her by following her on her Twitter account and also on her Instagram page.

Regarding her personal affairs and relationships, she has not been married or divorced yet. Therefore, no questions have been raised regarding her husband or children.

She however was engaged to a Rohan Antao, till 2009 before the couple separated. In 2009, her movie with Danny Boyle named Slumdog Millionaire was released, which became a big hit. From then, she was also rumored to be dating her co-star Dev Patel and the couple came out publicly as girlfriend and boyfriend.

However, that relationship recently ended in 2014 and she has been single since then. The couple was having a great time and wasn’t supposed to break up so soon in one interview Pinto said “Dev is an amazing and coolest boyfriend. It is so good to have him around me, he motivates me.