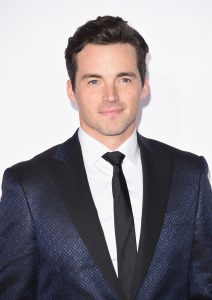 pretty little liars season 5’s first promo features shot Ezra in a hospital with panicking ex-girlfriend Aria. The promo asks the question “Who shot Ezra?” to the viewer’s stimulating lots of suspense for the upcoming story-line.

The role of the dramatic school teacher turned crime book writer Ezra Fitz in pretty little liars is portrayed by the American actor, Ian Harding since the show first season since 2010. He is so popular that he has got many fan-sites and biography devoted to him on the internet that worship him like a god.

He has won Teen Choice award continuously from 2010-2013 for pretty little liars and it’s no surprise that he is one of the highly followed male celebrity in America by American teens, especially by teen girls. Ian in real-life has straight forward life unlike his role Ezra complicated life in pretty little liars. Ian is a simple guy who listens to almost every kind of music from Taylor Swift to Lil Wayne.

He can be taken as the perfect example of boys next door. According to various sources, he has been to many dates in the past. Being sweet-heart of the millions of fans from all over the world, the 27-year-old actor gets floods of fans when he walks in public.

He is especially known in movies industry  for his top class acting in various movie projects like Dead time Stories 2, Adventure land, Love and Other Drugs, Christmas without you and Business card on Rocks. Talking about his television project, before PLL, he worked in NCIS: LOS Angeles.

What makes him different than his contemporaries in the industry are his uniquely good looks, perfectly athletic tall body with the height of 5 feet and 11 inches and his awesome easy going personality as well as his acting abilities. Ask him any question and he is always ready with some sort fof perfect explanation.

His down to earth personality is getting him immense fame and he is aware of that. He takes his acting job seriously, but according to him he wasn’t into acting at the first place.

He started acting just from the year 2009 from Deadtime Stories 2 at the age of 23. In his high school, he got into sports like any typical boy in Virginia. But he wasn’t good in sports so he decided to give drama a try. Since setting up mind to make something out of acting in his early 20’s, he casually looks out for professional working project.

He lands in the PLL cast in 2010, just after giving an interview, which changed his entire coming life. However, while in interview, he flirted with everyone and he was surprised by the fact that they selected him in spite of his flirting behavior. He has gone shirtless for pretty little liars in some occasions.

Those occasions were the time when the female fans of the show increased dramatically high. It is more likely hot Ian is dating someone. But he won’t share his love life to others except his PLL co-star lucy hale aka Aria, who is also his close friend. But Lucy isn’t his girlfriend, and it’s not revealed in public who he is dating neither it is revealed who Lucy is dating. But the photo revealed by his PLL co-star Keegan Allen in 2011 shows Ian with a mystery brunette.

Anyway Keegan and Ian are just great pals and they go double dates together. So, the girls in the photo can be some random girls as well. He isn’t a gay as per as the public knowledge but he is honored by the gay-right site, After Ellen in 2012 as a top Lesbro, meaning one who counts lesbians among his close friend and family. His sister Sarah is a Lesbian.  Except listening to different genera of music, her likes to be involved in photography. In fact he is a creative professional photographer.

Being so tall in terms of height with good looks, he can even be a model, if he wants. The girl with whom he will be married in future would be definitely lucky in finding such a handsome and successful husband. He is double-handed means he can use both hand to do various tasks. But he is afraid of oceans.

I guess if he dates a surfer or a swimmer, maybe he can overcome his water fear. Anyway, to get more wiki about him, keep yourself updated to our website www.unapix.com. Let’s hope that Ezra recovers from the incident in pretty little liars and the affair of Ezra and Aria becomes like what it used to be back in earlier episodes.