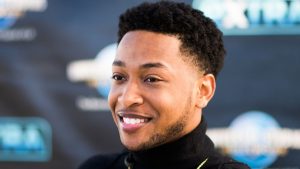 Birth name Jacob O’Neal Latimore, popularly known as Jacob Latimore is professionally an American R&B/pop recording artist, actor and dancer. Born on August 10, 1996 in Milwaukee, Wisconsin, U.S. Jacob made his presence in numerous movies such as ‘Vanishing on 7th Street’, ‘Black Nativity’, ‘Ride Along’, ‘The Maze Runner’, and ‘Just One Shot’. In very short span of time, when he was only nine years of age he grab the title of celebrity in the music industry.

Regarding his parents they were very supportive, enthusiastic and the kind of motivating ambiance was always given to him in childhood. His parents were great source of inspiration especially his father and uncles never let his feelings down with regards to his dreams in pursuing his career in the field of art and music.

They had formed ‘The Latimore Brothers’ which had become a well-built union among the Latimore family. In his early childhood age, he wanted to pursue a career in the music business and so he started to mobilize within his local Milwaukee producers that ultimately produced his first song named as “Best Friend” which was broadcast on Radio Disney. Now, it is estimated that he has a net worth of $1.2 million dollars when he became a fully established Professional singer and from the sold out albums.

Jacob’s parents were established celebrity with strong financial position and stardom; it was easy for him to get entry in the music industry and thereby he was also able to influence to the local Milwaukee producers for the production of his related composed songs and to launch the albums. Although, still there has not been enough information to describe about his academic qualification but it is not a guess to declare about his graduation which probably he has done in the field of arts and music.

Songs that he composed gave new taste to the listeners, as he targeted and favored local community. People began to shift the preferences about his genre of music and started to recognize the talent of this young man. Mounting his serious obedience in the field of dance, Jacob nurtured his skills and interest in choreography which later on became his subject for his studies.

With a mind set to move on with his passion on music and to create a platform to boost his talent and skills, Jacob moved to Atlanta to set up a premiere showcase in order to introduce the Atlanta music. The platform which was provided during the function gave positive reaction to the audiences and they were some of the Grammy award winning producer Rodney Jerkins and R&B singer Lloyd.

Talking about his personal life seems to be full of mystery and controversy, the information itself is not enough to give strong evidences and proof to support hypothesis given by critical person. It seems that he likes to keep the entire personal affair secret and likes to be in the periphery of his own world. However, the astonishing part of being one of the reputed singer, dancer or so called a multi-dimensional person does not have a girlfriend and he is still a single.

Rather than going for a dating and having affair with all those spicy girls does not add any value in his life instead he seems to give more priority to his career and goals. Now, by not having a girlfriend or going for a date, it does not mean that he is supposed to be a gay but it means that it has not been the right time for him to be in relationship.

Jacob with the height of 5 feet and 7 inches tall likes to keep in touch with his fans and also he is fond of sharing his pictures including shirtless posture through social networking sites like twitter and Instagram. Relating to his biography and also about his professional career can be found out in wiki and IMDb.