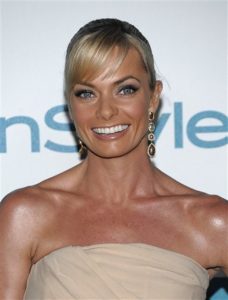 Jaime Elizabeth Pressly was born on July 30, 1977 in Kingston, North Carolina, United States Of America. She was born to parents Brenda Sue; a dance instructor and James Liston Pressly, who was a salesman. She has got two siblings one sister and one brother. As a child, she was into gymnastics and dance as well, doing both of it in her school and for about 10 years.

As her parents were not living together, she was with her mother who admitted her at Costa Mesa High School in California. At the age of 14, she was featured in the cover picture by Teen magazine. Soon, she was famous and started modelling all over America working for different agencies and products. She also moved to work in Italy as well as Japan as a model as well as a spokesperson for International Cover Model Search. She is said to have related in some way to Elvis Presley the most famous rock and roll singer.

Her career launched from the movie Poison Ivy: The New Seduction which was released in 1997. By 1998, she had already started to get offers, and the first was in a TV series Push. In 1999, she was casted for TV series Jack and Jill, in which she played the character of Audrey. She also did several movies like Not Anther Teen Movie and Torque in the mean while. In the year 2001, she was the face of Liz Claiborne’s cosmetics line of products. The following year, she was ranked in the list of 102 Sexiest Women in the World by Stuff magazine. With all this success following her, she launched her own line of lingerie in 2006 by the name of J’Aime. Besides that, she has also posed cloth less in several occasions. She has posed nude for the Playboy magazines in 1998 and also in 2004. She has also given her naked pictures in 2006 edition of Allure.

Considered one of the sexiest women of her time, Jamie has a well maintained figure. Her body measurements read 36-24-36 (Breast- Waist- Hip). She is not very tall and her height is 5 feet 5 inches which is 165 cm to be exact. She is also famous for her slim and sexy pair of feet. Her hot legs enhance her sexiness when she wears shorts, skirts and bikinis.

In 2011, Jamie was arrested for drink and drive in Santa Monaca, California. When interrogated by the cops, she faked her identity and said that her name was Earl. But the cops didn’t fall for it and she was taken to the police station where she was held up in a jail and got out for 15,000 dollars bail.

Her 2001 movie joe dirt was famous for many reasons. One of them was because of her hot and sensual roles in that film. In this movie, the role of Joe is played by actor David Spade. It is an adventure comedy film starring actors/ actress like David Spade, Dennis Miller, Christopher Walken, Brian Thompson, Brittany Daniel and others.

You can follow Jamie in twitter in this link here. She has been followed by more than 40 thousand fans and has given more than 2000 tweets.

She had been dating DJ Eric Calvo since 2004. After she got pregnant, the two of them got married in the October of 2006. She gave birth to their baby on May 11, 2007. In an interview she said that she wanted her child to be bilingual speaking both English and Spanish. Her current husband is Simran Singh, whom she married in 2009.

Her fansite is on here. To know more about her, you can read her information on Wikipedia.