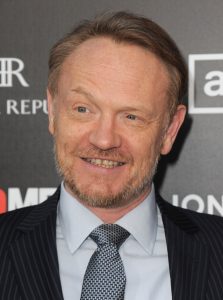 An English actor, Jared Harris (birth name Jared Francis Harris) was born on 24th August, 1961 in London, England, U.K. Best known for his superb portrayed in AMC series Season Mad Men and David Robert Jones on the Fox Science fiction series Fringe. Moreover, his work in the films were also really admirable such as ‘Lincoln’, ‘Mr. Deeds’, ‘The Curious Case of Benjamin Button’, ‘Sherlock Holmes: A Game of Shadows’, ‘Resident Evil’ and many more. People began to distinguish his character as a compassionate person who plays his role whole heartedly that is written within the script and does not go beyond the screenplay.

In the movie Sherlock Holmes, he portrayed as a Professor James Moriarty who was the arch enemy of Sherlock Holmes. 5 feet and 11 inches tall in height, Harris has accumulated his total earnings which is estimated net worth of $8 million dollars.

The son of the Irish actor Richard Harris, Harris is one of three sons in the family who got great influenced from his father. He has his younger brother who is also professionally Actor and regarding his older brother is the renowned Director Damian Harris in his country.

His mother Elizabeth Rees Williams the wife of Richard Harris was also an actress during her time. During his early age, his love for the art and acting grew upon him and mostly he was influenced from his father.

Soon, he wanted to pursue his dream in developing career in acting and he wanted to follow the footsteps of his father. In order to fulfill his dream he wanted to achieve an academic qualification, so, in 1983, he earned his BFA degree from Duke University.

He wanted to initiate his film career with strong and effective approach. So, his career started with as director in an unfinished feature film named ‘Darkmoor’. He made his debut film performance in The Rachel Papers as an actor and it was just starting point for his possession in the film industry. Later on he started to gear up his name to gain fame for his outstanding role in AMC series Mad Man and Fringe. Harris also made his presence in the television series Lost in Space where he portrayed the role of the aged man named Will Robinson.

After the success of his consecutive movies, he never had to look back towards his past life and gradually people began to appreciate his talent and skills that he represented in the film. Some of the remarkable role that he portrays was of king Henry VII, the film was based on the novel ‘The Other Boleyn Girl’. One of his fresh movie roles was in the movie Lincoln which was directed by Ulysses S. Grant and also in the Mad Men as Lane Pryce that dated from 2009 to 2012.

The information regarding his personal affair and relationships does not disclose enough facts. But still some of facts about him have been revealed like he married actress Emilla Fox.  Regarding about his children in the family is still not known, but his wife had desired to have kids to bond the family. However, they didn’t bear any kids and finally they got divorce in January 2009.

After all, he again married to Allegra Riggio and his wife professionally is a lighting designer and TV host. Regarding his sex appeal, there has not been any issue about gay in his relationship with Riggio.

To get latest updates about Harris, you can follow him in twitter and also for detail information; you can simply go for Wikipedia.