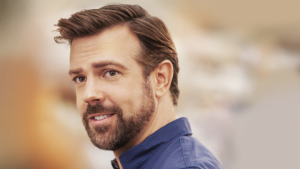 The renowned actor and celebrity of the American Television and movie industry, Jason Sudeikis is well known for numerous of his portrayals in small and the big screen. This dashing and hot personality with wide fan followings was born in September 18, 1975 in Fairfax, Virginia. Sudeikis able to make himself known as American actor, comedian, screen writer and voice actor.

He is well known for his performance in the films Horrible Bosses, Hall Pass, We’re the Millers and Epic. Sudeikis was born with American nationality to his mother, Kathryn and father Daniel Joseph Sudeikis. An actor with Irish, Lithuanian and German ethnicity and Greek decent, Sudeikis has two sisters. Sudeikis in his very early age moved to his home town Overland Park, Kansas with his family. Sudeikis attended Brookridge Elementary School and later on he was transferred to Holy Cross Catholic School. In the year 1990, Sukdeikis began his high school by attending Jesuit Rockhurst High School.

Due to academic reasons, he was transferred to Shawnee Mission West High School. He enjoys playing basketball and dancing. Previously Sukdeikis used to perform at ComedySportz in Kansas City. Later on he moved to Chicago where he studied at the Annoyance Theatre and ImprovOlympic.

He was also founding member of the long-form team J.T.S. Brown. In the meantime he was casted in The Second City’s National Touring Company. He also performed in Amsterdam with Boom Chicago. Soon after, he was a founding member of Second City Las Vegas. In the year 2003, he presented himself as a sketch writer for Saturday Night Live. He also appeared as a featured player on the show in May 2005.

In July 2013, it was announced that Sukdeikis will be leaving Saturday Night Live. In the early 2007, he appeared on the NBC series 30 Rock with a recurring role. He also appeared in 2008 episode. Along with Jon Hamm and Dean Winters, he again appeared in Valentine’s Day episode. He also voiced for right-wing radio host Richard Bastion for the video game Grand Theft Auto IV.

He was also seen in 2008 comedy What Happens in Vegas where he played the role of Cameron Diaz’s ex-fiance. In July 2008, Sudeikis appeared in web-series The Line on Crackle with Joe Lo Truglio and Bill Hader. In March 2010, Sudeikis was seen in the film The Bounty Hunter with Jennifer Aniston.

He also provided his voice for FOX animated comedy series The Cleveland Show as an voice actor. Sudeikis joined the cast of Horrible Bosses in May 2010. On August 16, 2010, he co-hosted WWE Raw with Justin Long and Charlie Day.

On June 5, 2011, he hosted 2011 MTV Movie Awards. In the same way, he appeared in HBO series Eastbound & Down and in a music video of song “Hopeless Wanderer”. Talking about his relationship status, he is twice married.

On June 26, 2004, he was married to ‘30 Rock’ writer Kay Cannon he had a divorce with her wife in 2010. Since then he started dating actress Olivia Wilde and finally got engaged with his girlfriend in January 2013. He has one son born in April 20, 2014. He has no any rumors about his affair. The good-looking is a successful actor with good height and hair that suits him very well. He is 6 ft. 1 inch tall. His fans can find shirtless pictures in his personal sites.

Some of them are also posted in different gay sites. Much more about his biography can be found in wiki.