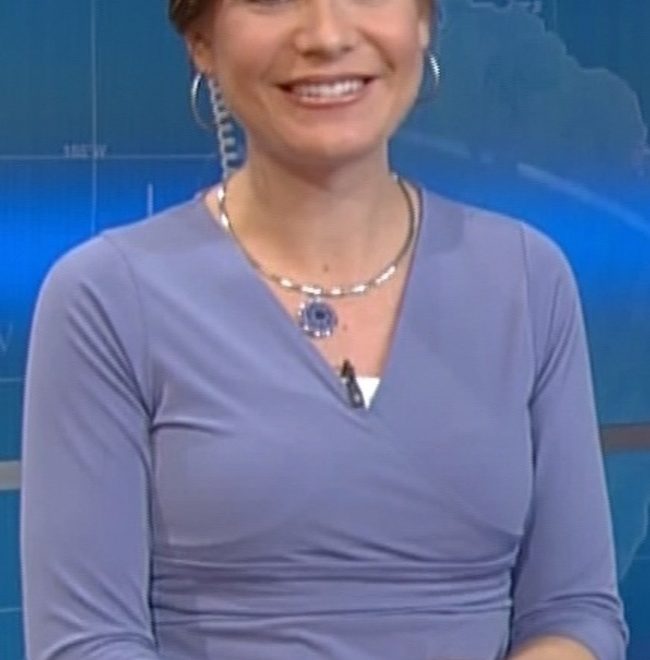 Jen Carfango is one of the On-Camera Meteorologist for The weather channel (TWC). She has American nationality. She completed high school education from her hometown at Perkiomen Valley High School and got bachelor degree in meteorology from the Pennsylvania State University, Pennsylvania in 1998.

She is married to her husband Neil and has happy married life. They are probably living in Atlanta, Georgia 30339 with two daughters named Kelly and Natalie. There are no any rumors about other affairs of her except with Neil before they married.

All rumors about Jen and Neil divorce are definitely some bad hoaxes led by crazy people. Talking about her age, she hasn’t mentioned her exact age in the media, but it is guessed that she has already crossed mid 30’s.

Talking about her interest and hobbies, she likes to spend quality time going somewhere out with her husband and two kids. In an interview, she says that she adores working on her yard with her husband especially when cutting the grass.

She says she would always argue with Neil just to cut the grass on her yard and both would work together adoring each other. Her favorite place to visit will be a beach and she likes weather that has clear skies.

Her favorite’s beaches are beaches of Walton County Florida for their squeaky white sand, emerald green water, and coastal dune lakes and the Jersey Shore for the board walks and great wide beach. She is in love/hate relationship with winter because she prefers warmer weather to colder ones. One thing that she loves about the winter the most is she gets to wear her boots.

When she was a kid, she wanted to be a pilot because she was interested in math and science and she was always amused by the weather as she wanted to see sky and clouds closely.

She started her career in TWC from the year 1997 later, after joining in channel summer internship program at first. She was really happy working at TWC   because she had a sling psycrhomotor that measured dew point at the pool when she started her job. She, at first, worked as an on camera meteorologist hosting weekend’s program on TWC.

She works real hard and therefore, is now one of the reputed weather women in USA. Previously, while at TWC, she worked in “Weekend View” with Eric Fisher and now, she works in the weekend weather program with Reynolds Scott Wolf.

Jen`s career prominent  achievements would be different awards and recognition she got including  Robert O. Cole awardin199,  her teaching Award from Pennsylvania State of university in 1998 and a reputed membership of Chi Epsilon Pi Honor Society.

She believes in running for good health and she has been able to develop her body to quite athletic build. She has a country girl personality and loves to listen to country music. She is fond of cooking so much that she would cook the same dish again and again it if she gets time.

Her major hobby would be taking pictures of various places as she travels and creating digital scrapbooks and other picture projects out of those pictures. She also directly links herself with various students from the locality discussing and answering weather related queries from time to time.

She has followed her passion and she never let her professional work harm her personal life. She is an adventurous type of person and as much as she likes and understands the healing and energizing part of spring, she also understands coldness of winter and warmth of summer. She is an environment lover who plants trees and flowers. Analyzing her life, we rate her as the woman who knows what she is doing and in fact, who loves what she is doing.

Her work in weather is admirable because she is making life of many people better off by making people understand about the weather conditions. She is a classic example of “Beauty with Brains”.

She is an amazing woman with a perfect athletic body, nice face and hair plus she has real knowledge of weather. Her fans generally take her reporting style to be pleasing and when she wears her short skirts with high heels exposing her beautiful legs and thighs, they go crazy.

You can know more about her via her Facebook page, her twitter page, Google, Wikipedia and YouTube. She often shares various weather and climate information via her twitter page. Any new wiki found about her in future days would be presented to viewers in form of future article in our website unapix.com.