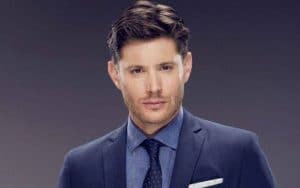 Jensen Ackles (birth name Jensen Ross Ackles) was born on March 1, 1978 (age 36) in Dallas, Texas. He was a son of Donna Joan (née Shaffer) and Alan Roger Ackles, an actor. His parents were going to name him Justin but his parents thought it was too common and named him Jensen. His first name is actually a surname and is the most common surname in Denmark.

By profession, he is an American actor and Director. He has a brother, Joshua, who is three years older and sister, Mackenzie, who is seven years younger. He is of English, Irish, and Scottish ancestry.

He had planned to study sports medicine at Texas Tech University and to become a physical therapist, but instead moved to Los Angeles to start his acting career.  After three years of dating, Ackles became engaged to actress, model, and gymnast Danneel Harris in November 2009.  The couple married in Dallas, Texas.  The wedding date is on May 15, 2010.

They met when they were both involved in the short film The Plight Of Clownana, and started dating around the time of filming Ten Inch Hero. They have one sweet little daughter, Justice Jay “JJ” Ackles, The birthday of the cute little princess is on May 30, 2013. Jensen Ackles is a born star. He was a child model at age 4, then quit, and started again at age 10. In 1996, Ackles began to concentrate on an acting career.

Jensen is very much dedicated to his work. Because of his dedication to his work he won a  Soap Opera Digest Award (1998) for Best Male Newcomer and went on to be nominated three times (in 1998, 1999, and 2000) for a Daytime Emmy Award for Outstanding Younger Actor in a Drama Series for his work on Days of our Lives.

In 2001 he appeared in a guest role on the James Cameron television series Dark Angel on Fox as serial killer Ben/X5-493. In 2003, he joined the cast of the WB’s hit show Dawson’s Creek during its final season, playing CJ, Jen Lindley’s lover.

He also had a small role in the 2004 short film The Plight of Clownana. In 2005, Ackles joined the cast of the CW horror/drama series Supernatural, where he stars as Dean Winchester. Dean and his brother Sam (Jared Padalecki) drive throughout the United States hunting paranormal predators, sometimes with their father, John (Jeffrey Dean Morgan).  Jared Padalecki and Jensen Ackles are best friends.

Jared Padalecki even calls Jensen’s father Papa Ackles. There was a rumor that they were gay. But I guess these are just rumors.  In 2007, Ackles took on the role of Priestly in the independent comedy Ten Inch Hero.

And the summer of 2008, Ackles was cast in the remake of the cult film My Bloody Valentine 3D, which opened nationwide on January 16, 2009. Ackles lent his voice as the Red Hood (Jason Todd) for the animated film, “Batman: Under The Red Hood” (2010) and   Disney Interactive Studios for a character named Gibson in the video game, Tron: Evolution.

This handsome hunk is tall and has a height of 6′ 1¼” (1.86 m).  Jensen’s trademarks are Deep Husky Voice, Ginger Beard, Green eyes. He often plays men with intense emotional and psychological issues. He frequently plays characters with an overwhelming need for parental approval. Jensen’s is not into tattoos or piercings.

Jensen’s haircut simple His shirtless pictures can be found on internet. Jensen Ackles is an American actor with a net worth of $5 million. He acquired that net worth as a television actor.